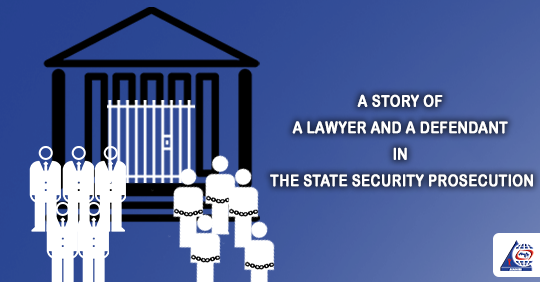 In this paper, we will not address theoretical issues or speak that much.

This paper (testimony) details how laws and the Constitution deal with the Prosecution, lawyers and defendants, and what actually happens in practice.

This paper is an eyewitness testimony;

A lawyer defending his clients, usually before the State Security Prosecution.

The testimony is divided into specific sections:

First: What is the Supreme State Security Prosecution?

Second: Lawyers’ rights and guarantees during investigations before the Prosecution

–   Lawyers should be allowed access to investigations until the day before the interrogation of their clients. They also should be informed with whether their clients were confronted by other defendants or witnesses; in order to be ultimately aware of and knowledgeable about what happened in the investigation, so that they could fulfill their duty to reach the truth sought by the society.

– The defendant may be left alone with his lawyer before the investigation without the presence of any of the public authority members or public officials.

– Although they ought to remain silent during investigations, lawyers have the right to monitor and check the impartiality of the investigation and make whatever statements, comments, requests and remarks on witnesses’ testimonies, in writing or orally.

– Lawyers have the right to visit their clients detained in prison.

We are always informed that upon a directive from the State Security Prosecution’s Attorney General, lawyers are denied access to any papers related to the case in which he attends as a defense lawyer for the defendant.

You weren’t allowed to check the case papers. Well, you might be able to find out the charges attributed to the defendant with whom you are attending the investigation; through writing down the questions and accusations and any other observations and notes you made during the investigation in order to be able to give your legal defense to your client, who is considered innocent until proven guilty. However, you are deprived of such an inherent right.

After interrogating the defendant or considering his detention renewal, it is normal to ask about the decision issued by the Prosecution regarding your client’s case; rather, it’s your duty to do so. But in the State Security Prosecution, you are not informed with the decision except on the second day of the investigation or the detention renewal session. You might even hear the decision in the media!! But in all cases, you won’t know it except after the investigation is over.

You have to calculate days and dates carefully so that you can guess at what day your client may be present in the Prosecution for his detention renewal; that’s because they won’t tell you, or else they can provide you with a different date.

To request submitting an appeal from any of the Public Prosecutor’s deputies, your request will probably be rejected, and they would reply: “There are the instructions/orders”. And if you head to the Attorney General, he would answer: “You can file an appeal. Has anyone prevented you from doing so?”, and if you actually do so, your request to file an appeal will be inevitably rejected.

If you ask ‘Why so?!’, the answer will be “Instructions” or “Submit your request and wait for someone to accept it”.

Fourth: The defendants’ rights during investigation and the actual reality they experience

As for the defendants’ suffering in the State Security Prosecution, it starts from the first moment they got arrested or appeared after being forcibly disappeared, as the case may be…

Let’s talk here from the first moment defendants appear inside the State Security Prosecution, which is supposed to be the entity that is keen most on protecting their rights and maintaining the integrity of the lawsuit.

– (The defendant to the prosecutor: My detention has been kept in renewal for a long                     period of time. I have been interrogated only once and the interrogation hasn’t been completed yet nor have I been confronted with the one who wrote such investigation that brought me here.

– The prosecutor: I don’t know anything. I am here just to consider you detention renewal)

This is a semi-permanent and usual conversation between defendants and prosecutors in the prosecutions’ offices, and as a lawyer, I heard it a lot and even took part in it hundreds of times.

It is regrettable that the provisions of the law are being disrupted and the rights of both defense lawyers and suspects, guaranteed by the Penal Code and the Criminal Procedure Law along with the Constitution, are being wasted.

It is more regrettable that such provisions and rights are wasted by an entity that is, supposedly, entrusted with the implementation of the law “The Prosecution’s Office”.

The Public Prosecution is an entity that constitutes a representative of the Egyptian society in the valid implementation of the Penal Code’s provisions, and not an opponent or a litigant. It also shouldn’t deal with lawyers and defendants as an opponent or litigant.

It should be eager to implement the law and respect it.