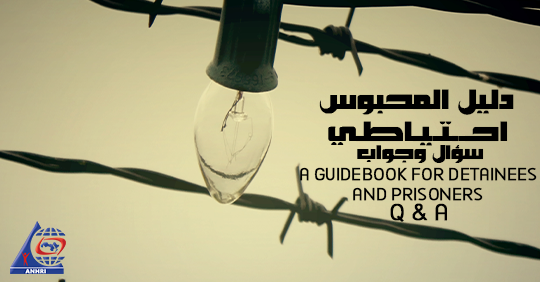 What does pretrial detention mean?

Does pretrial detention have rules or conditions?

(Article 134 of the Criminal Procedure Code)

What are the guarantees of pretrial detention?

Do pretrial detainees have legal rights?

Of course, detainees held on remand have several legal rights from the moment they got arrested to the investigation process and detention. These rights are represented in the following lines:

(Articles 54 and 55 of the Egyptian Constitution)

What are the other legal rights guaranteed for pretrial detainees?

Those held in preventive detention have the right to appeal against their detention renewal orders every 30 days.

What does that mean? Is it not supposed that he is entitled to appeal against every detention renewal order issued against him?

Do pretrial detainees have legal rights throughout their detention period?

Are there alternatives for pretrial detention?

What would be the legal procedure in case the accused violates such obligations?

– If the accused person doesn’t comply with the aforementioned obligations imposed by any of the precautionary measures, he may be remanded in custody again upon a substantiated order by the competent authorities.

Are there rules that regulate these precautionary measures?

Are there rules or regulations for disciplining pretrial detainees?

Is it permissible to compensate pretrial detainees for the period served in prison in case he is acquitted?

But she passes within a wink

This brief report contains a series of pending cases and files whose fate remains uncertain, they did raise a lot of controversy and different reactions, discussed by many media platforms, their developments were discussed and followed up by bloggers and public opinion on social media. Some of them were brought to courts.

But over time, attention to these issues has faded, among the public as well as among officials.

This decline was not due to them being resolved, nor the disclosure of facts or details about them, and it was not for taking the necessary measures to hold accountable and punish the perpetrators, but due to the abundance of new incidents and accelerating events.

Therefore, since the role of legal and human rights organizations is to sound the alarm, fight against blackout and impunity, and against the wasting of the value of justice, we have chosen to present some examples of such pending cases, remembering them, removing the dust of disregard from them. We list them in a chronological order, to ask what happened with the older ones, in order to figure out how the newest will turn out!

On May 1, 2014, the security forces arrested Aya and her husband, while the public prosecution claimed that a report from a parent accusing the association of detaining his son was the motive for their arrest.[1]

For three years, Hegazi and Hassanein were held in pretrial detention.

Yet a question, or rather questions, remain unanswered:

2- General Ibrahim Abdul Aati and Treating AIDS with Kofta
On February 23, 2014, Major General Ibrahim Abdul Aati announced at a press conference by the Armed Forces Engineering Authority that he invented a device capable of treating both AIDS and Hepatitis C patients, Abdul Aati said: “I take the HIV from the patient and return it to him as a kofta”, therefore, the invention became known publicly by the name of “the Kofta machine”.[4] The military Engineering Authority also set June 30 of the same year as the launching date for the treatment of patients. From the date of the so-called proposal announcement till now, there has been no developments about it and it was not mentioned, except by the public as a joke.

Turning the “alleged discovery” into a joke or a substance for satire, does not prevent multiple questions from arising:

3- Salah Diab’s weapon case
On November 8, 2015, security forces arrested businessman Salah Diab from his home after claiming that they had found two automatic rifles with him.[5] His photo was released immediately after his arrest to show how he looked startled and broken!

It is remarkable that all speculationabout the reason behind what happened with the businessman did not include combating corruption.[8]

The Italian PhD student, who disappeared on January 25, 2016, then his corpse was found deformed in a hole on a desert road on February 3, 2016.

The Egyptian side’s investigations have not yet resulted in anything, despite the fact that many media figures close to the government, sometimes to discredit the victim, other times claiming that a gang killed him! Especially as a statement by the Egyptian Interior Ministry on March 24, 2016, said it has eliminated a gang for taking part in the killing of Giulio Regeni, without overwhelming evidence of the allegation, prompting the Italian side not to believe the story[9] .

Several meetings and discussions between the Egyptian and Italian investigation teams were held, and nothing was added except more ambiguity and vagueness, in which light went down on the case and the question remained:

But the Italian prosecutor, addressing parliament in December 2019, accused Egyptian officials of attempting to mislead investigations[10] This was followed by a decision by the Egyptian Public Prosecutor in January 2020 to form a new investigative committee to take over the case[11].

Tarek Saad, Saad Tarek; a father and son and their in-law Salah Ali, along with Ibrahim Farouq, a micro bus driver and Mostafa Bakr, Salah’s friend: five murdered victims. After the Interior Ministry declared the elimination of a five-member gang, claiming that the victims were specialized in kidnapping foreigners and stealing them by force, in an attempt that was doomed to fail to close the Italian researcher’s murder file. They even claimed that they had the Regeni’s bag. But they were declared innocent afterwards, and the question remains:

5- The Escape of Habib al-Adly:
On May 15, 2017, the Ministry of Interior notified the Public Prosecutor’s Office that Habib al-Adly had escaped from his home and could not be arrested to carry out the sentence imposed by the Criminal Court in the case of the seizure of Interior Ministry funds[13]، despite his lawyer’s statement that al-Adly would attendthe Cassation court session in person[14].

Habib al-Adly appeared in the Court of Cassation,  the appeal was accepted. He was acquitted after being retried on May 9, 2019, session.

Yet some questions need answers:

After being held in custody for a few days, the assailants were acquitted and released on the basis of forensic reports that incriminated the Counselor, as the former head of the Central Auditing Agency (CAA) turned from a victim to a perpetrator[17].

7- Mostafa Al Naggar’s disappearance:
In September 2018, Dr. Mostafa al-Naggar disappeared and the news of his disappearance followed a major uproar, which was terminated by the Al-Dostor newspaper by publishing the news of his arrest on 13 October 2018.”https://www.dostor.org/2358355” But Egyptian authorities denied knowing his whereabouts nor arresting him, which raised a state of anxiety and many questions :

8- Repeatative assaults against Gamal Eid:
Despite the repeated attacks on human rights lawyer and director of the Arabic Network for Human Rights Information Gamal Eid, and the filing of a report each time with the details of these attacks, the reports always reach a standstill and an unknown fate. To raise real questions that raise doubts about the unknown/known:

9- Death of Shadi Habash during his illegal detention:
A 20-year-old Egyptian filmmaker contributed to the release of a satirical political song, then he was punished by imprisonment in March 2018, pending case 480 for 2018State Security. Shadi Habash exceeded the maximum legal limit for pretrial detention in March 2020. He was not released. On May 2, 2020, friends and family of Shadi Habash were surprised by the news of his death in prison!

These are some pending cases that repeat certain questions and remind of them, in an attempt to urge the Egyptian authorities to show political and legal will to implement the law and put an end to its violation, and to stop the diluting of justice by blacking out these cases and others, which waste the citizens’ right to feel safe, secure and the belief of equality before the law.

An attempt to stop the destabilization of the citizens’ trust in the justice system and in the values of justice and humanity. A question remains, that needs to be raised and insisting on demanding an answer for, in order to avoid reaching this state of mistrust between the citizen and the justice system:

When will all these questions be answered concerning the above-mentioned cases, as well as other pending cases?