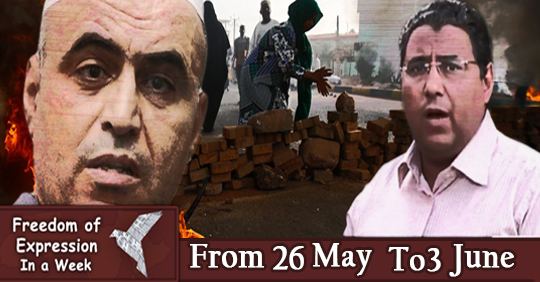 On 26 May, the Court of Administrative Justice decided to refer the lawsuit filed by Al-Mashhad newspaper’s editor-in-chief to rescind and halt the implementation of the Supreme Media Regulatory Council (SMRC)’s decision No. 16 of 2019, regarding the list of sanctions/regulations and measures that may be applied against entities governed by the Law Regulating the Press and Media, to the State Commissioners Authority, in order to prepare its legal report.

Egypt’s Al-Tagamoa Party released a statement on 29 May announcing the confiscation of Al-Ahaly newspaper for the third week in a row. The statement added that the security official (in charge of monitoring print media) called the newspaper’s editor on 28 May asking him to omit a press report addressing the recent pardons and release orders granted to a number of convicted people, and when he refused to do so, the publication of the newspaper was suspended on the 29th of May.

The National Security apparatus returned journalist Mahmoud Hussein back to jail despite the probationary release ordered for him by the court.

On 23 May, an Egyptian court upheld the release order issued for Mahmoud Hussein with precautionary measures, and accordingly he was transferred to Abu al-Nimras Police Station in Giza. However, after spending one night in the police department, the journalist’s family was surprisingly informed that Mahmoud had been taken once again to the State Security Prosecution pending investigation into another case; Case No. 1365 of 2018.

Nine killed, others wounded in an attempt to violently disperse the General Command’s Sit-in

The Sudanese Doctors Central Committee announced the death of 9 people at least and the serious injury of others, in an attempt by the military junta (Transitional Military Council) to break up the sit-in staged in front of the General Command of the Armed Sudanese Forces in Khartoum on the 3rd of June.

Human rights activist Kamal Eddine Fakhar died on May 28 at “Franz Fanon Hospital” in Balida, 50 km from the capital, owing to some health complications resulted from entering a hunger strike to protest against his imprisonment because of “Facebook” posts.

Protesters arrested near the post office in central Algiers

On 31 May, the police forces arrested a number of protesters and activists to prevent them from demonstrating outside the Grand Post Office in Algiers, at the time many Algerian people took to the street to demonstrate on the 15th Friday of the popular movement witnessed by the country since 22 February.

On May 27, the Kuwaiti Criminal Court sentenced Kuwaiti activist and blogger Musaed al- Mosailem to five years in prison with force and labor and a fine of 10,000 dinars (about 33,000$); for allegedly “carrying out a hostile act against UAE, insulting the emir, spreading false news and misusing mobile phone”, owing to a tweet addressing UAE. The total sentences against al- Mosailem, currently residing in Switzerland, would hence amount to 50 years.

Abdellah Hajili, the father of a contractual teacher, died in Rabat’s Suisei Hospital on 27 May, after he suffered chest and shoulder fractures when security forces violently intervened to break up the Contractual Teachers Sit-in at the parliament building on 24 April.

On May 26, the Saudi Press Agency (SPA) affirmed that the regulations of maintaining public decency have been postponed upon the cabinet’s decision, adding that the measures associated with the implementation of the regulations are still under study and consideration by the concerned authorities.

Under this law, “whoever wears immodest clothing that has photos, symbols or graffiti art that offends the public decency may carry a fine of 5,000 riyals ($1,333). The law also prohibits any writing or painting on walls or means of transport, if not authorized by the concerned authority. ”

The Independent Commission for Human Rights (ICHR) announces, on 30 May, the release of its annual Human Rights Report in Palestine. The Commission said in its report that the year 2018 has witnessed further deterioration in the situation of human rights in Palestine in light of the Israeli occupation’s ongoing violation of the international law’s rules. ICHR added that there are patterns of violations have become so chronic that they can be described as systematic, especially when it comes to political detention and the restriction of freedom of opinion and expression, not to mention the restriction of political participation while showing a complete lack of due diligence in holding general elections.

On 27 May, the Public Prosecutor in Hamas-run Gaza Strip decided to ban the distribution of Al-Hayat Al-Jadida newspaper in the Gaza Strip; for allegedly “publishing materials that promote sedition and incitement to attack public property.”

Upon this decision, the newspaper’s general manager is also summoned to appear before the Prosecutor on the June 10 session to investigate the case.