Labor and Social Protest Index during May 2019 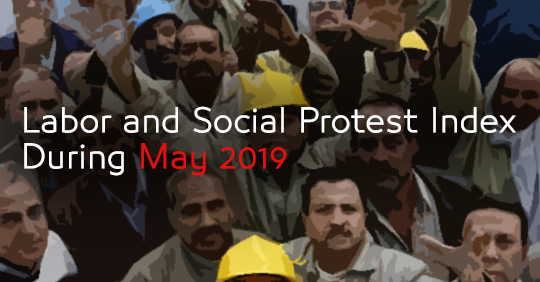 Program of Freedom of Expression for Labor and Social Movements

Before going into detail about the labor and social protests took place during the month of May, we have to shed light on two major incidents:

At first glance, it may seem a minor incident we frequently hear on the news “A worker in al-Basateen district commits suicide”. But when we go into detail and consider the context surrounding the incident, we shall learn that the suicide of Mohamed A. H. S. is not just a passing incident; it is the first case monitored by the Freedom of Expression for Labor and Social Movements program when a worker committed suicide by hanging himself in a machine in the factory where he works at the 10th of Ramadan region in Sharqiya governorate; for passing through financial distress.

As you can imagine, this is the situation of regular workers, let alone the non-regular or unemployed workers.

And, more importantly, why did Mohamed prefer to willingly kill himself while he had the ability to practice other forms of mass and organized protests?

Despite the siege and repression, high school students took to the street organizing various forms of protests that are scattered across the country’s several provinces. The protests are to denounce the Ministry of Education’s failure to implement the new electronic education system known as “the tablet system”, which the Minister of Education introduced it as the best cure for the “Thanawyia Amma” malfunction and the most effective tool to eliminate private tutoring.

The program of Freedom of Expression for Labor and Social Movements monitored 49 protests during the month of May, including 9 labor and professional protests and 40 social protests, summarized as follows: 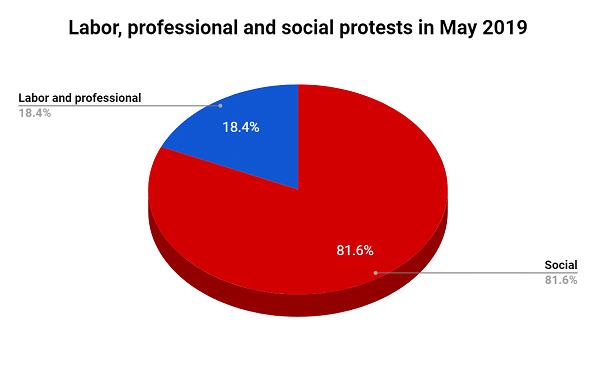 The program has monitored 9 labor and professional protests, distributed as follows:

The details of such protests go as follows: 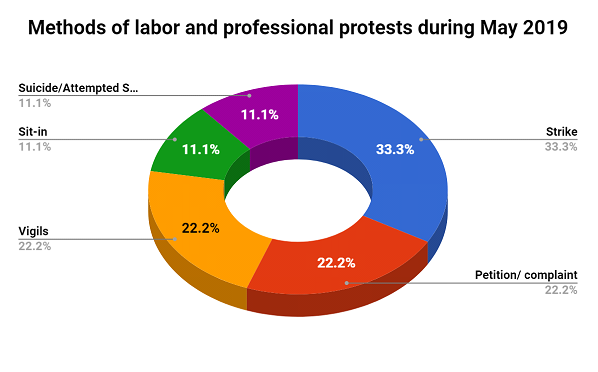 Workers and employees used striking to work (work stoppage) as a method to protest 3 times this month, as follows;

The program has monitored two vigils organized by workers during May;

During the month of May, labor and professional movement witnessed two cases where workers filed complaints as one of peaceful protest’s methods, as follows;

The program monitored only one sit-in that was held as one of the labor protests’ methods during the month of May, as follows;

For the first time, the program of Freedom of Expression for Labor and Social Movements monitored in May a case of suicide due to poor economic conditions among workers, as;

The program monitored 40 social protests during the month, detailed in the following chart: 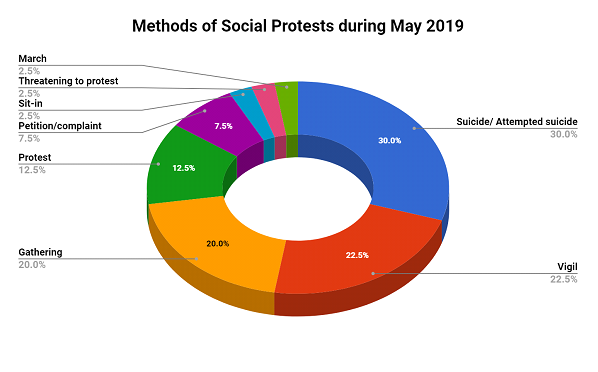 12 cases of suicide and attempted suicide took place during February 2019 leading it to be at the forefront of social protests’ methods. All of these cases were to protest against the deteriorating economic and social conditions.

The details of these cases are outlined as follows:

The program monitored 9 vigils took place during the month of May, placing vigil in the second ranking of social protests:

Gathering came third in the social protests with 8 cases took place this month as follows;

Protests came in the fourth ranking of the methods of social protests during the month of May, which witnessed 5 cases of protests and demonstrations, as follows:

Filing petitions or complaints ranked fifth in the social protests’ methods of May with 3 cases during the month:

It came in the sixth ranking with one case took place in May;

It also came in the sixth ranking in the protests’ methods of May with one case;

Organizing rallies and marches came sixth in the social protest’s methods of May with only one case; 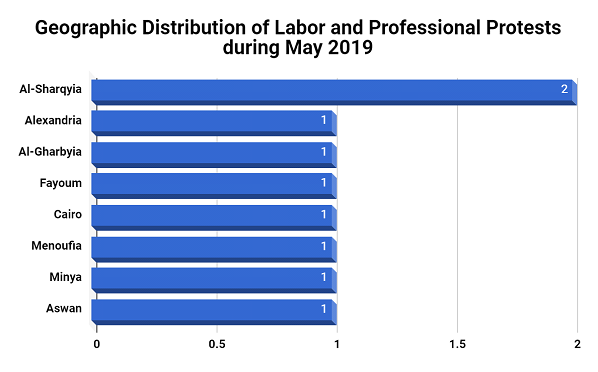 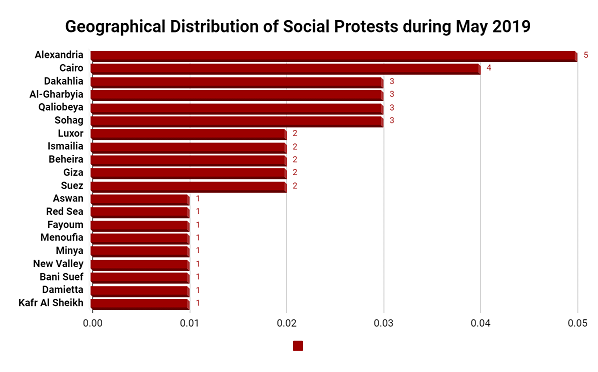 Social protests in May were divided into five groups in terms of their number. Alexandria topped the social protests with five protests organized during the month, followed by Cairo with 4 protests, then came the governorates of (Dakahlia, Gharbia, Qalioubia and Sohag) in the third group with 3 social protests each.

The fourth group then included the governorates of Luxor, Ismailia, Beheira, Giza and Suez, with two protests for each governorate. 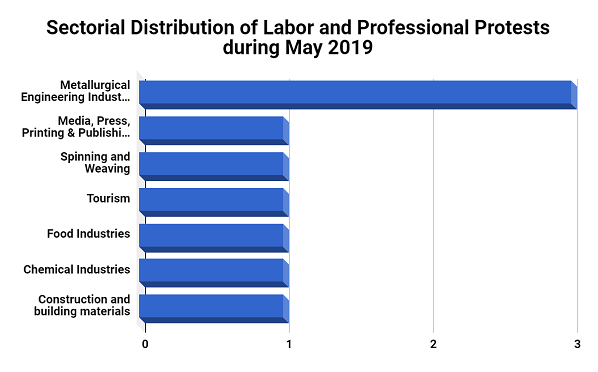 The (Metallurgical Engineering Industries) sector topped the labor and professional sectors with 3 protests this month, followed by the sectors of (Media, Press, Printing, Publishing, Spinning and Weaving, Tourism, Food Industries, Chemical Industries, Construction and building materials) in the second place with one protest each. 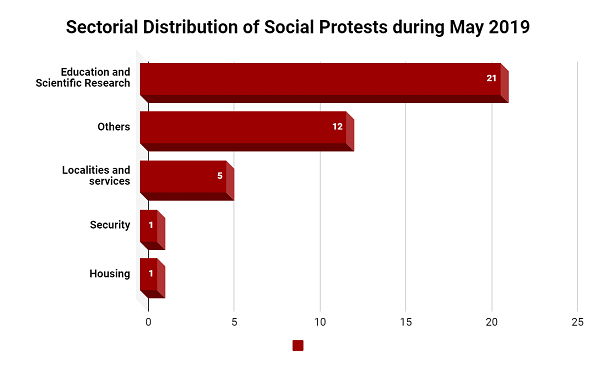 The Education and Scientific Research sector came at the forefront of the social sectors that witnessed protests during the month of May with 21 protests; this is due to the student protests that swept most of Egypt’s provinces denouncing the new electronic examination system. Suicide, however, fell to second place with 12 cases of suicide that took place due to poor living conditions. Then, the “Localities and Services” sector, which witnessed protests against poor services, came in the third place with 5 cases, followed by the Security and Housing sectors in the final rank with only one case each.

Program of Freedom of Expression of Labor and Social movements