Program for Freedom of Expression Labor and Social Movements

The number of labor and social protests declined in April compared with March, which coincided with the state of emergency being renewed for three months.

The Parliament approved constitutional amendments that would give carte blanche to the rule of one individual and give the current president additional years in office. 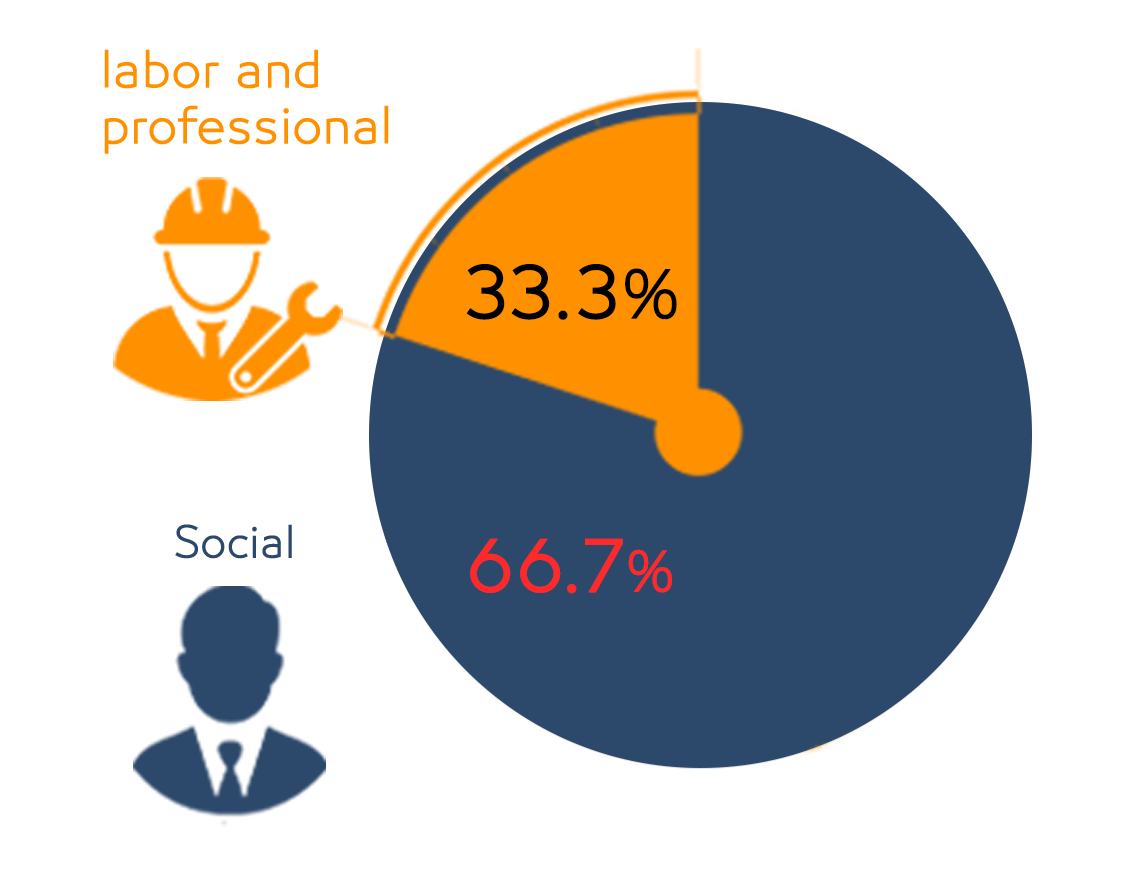 The program of freedom of expression of labor and social movements monitored 27 protests during the month of April, including 9 labor and professional protest, as well as 18 social protests, summarized as follows:

The program has monitored 9 labor and professional protests during April 2019, distributed as follows;

Workers and employees used striking to work as a method to protest 3 times this month, as follows;

The workers in The Sound and Light Show Company in Philae, Aswan started a strike to work on April 2nd demanding their financial incentive and housing allowance that had been suspended. The strike was stopped when the Minister of Business Sector approved their demands.

Workers in Regina for Pasta & Food Industries started a strike to work on April 8th in protest against the transfer of some workers to the storage units in Upper Egypt while others were dismissed.

The workers in Amriya Pharm Industries entered an open strike to work on April 17th in protest against the arbitrary dismissal of 45 of them and the dissolution of the company’s trade union committee.

3 sit-ins at least occurred this month for labor and professional protests, as follows;

Journalists and employees in “AlOsbou’ newspaper decided to have a sit-in in the headquarters on April 11th in protest against the nonpayment of their salaries for 5 months.

Workers of Cleopatra Cement Company “Menia formerly” held a protest on April 15th to raise their incentive rate and claim health insurance. The sit-in continued for 6 days and then on April 20th, the company decided to dismiss 88 workers with temporary contracts and partially shut down the factory.

Labor and professional protests were in the form of vigils in April in 3 cases;

Nurses and workers in Menia Qamh general hospital organized a vigil on April 8th in protest against the physical assault of the hospital’s manager on one of the nurses.

Dozens of employees in the National Media Authority in the TV Research Building organized a vigil on April 10th demanding their delayed bonuses. The head of security in TV convinced them to end the vigil till the problem’s resolution.

The employees in the National Media Authority organized a second vigil on April 14th to claim their frozen financial benefits from 2016. These demonstrations or vigils received no attention from officials of the TV building

The program has monitored 18 social protests, distributed as follows;

This method came first in terms of social protests during April 2019, in protest against the deteriorating social and economic conditions, as follows;

Lawyer Sh. E., 30 years, hanged himself in his residence in Bartas village in Oussim police station after going through a financial crisis.

Housewife A.B.E., 22 years, killed herself by swallowing poisonous pills on April 17th because her father going through a financial crisis.

Cairo security saved a housewife in Dar AlSalam on April 6th after jumping off the Nile bus in Manial after family disputes with her husband because of poor living conditions.

An African citizen tried to commit suicide on APRIL 16th by jumping off May 15th bridge saying he had been passing through poor living conditions.

Mohsen E. hanged himself in his room in Zaitoun, Cairo because of financial constraints.

Ahmad A., 27 years, hanged himself in his residence in Shubra Al Khaima-I for passing through a psychological crisis for not being able to find a job.

Worker M.G., 35 years, killed himself by swallowing poison on April 14th because of marital disputes and accumulation of debt.

This came second by 5 cases;

A number of radicals in Khafir in Akhmim, Sohag, gathered on April 12th and surrounded Saint Karas church building, assaulted the priest, the priest of the church, and wounded another Christian. Security forces intervened and got the priests of the church outside of the village while securing the building.

More than 20 policemen gathered on April 4th morning, inside the train no. 980 refusing to pay for tickets.

Parents of students gathered on April 2nd morning in front of Moqrani primary school in Fayoum, accusing the school principle and one of the teachers of sexually molesting their children.

A number of residents gathered on April 12th in Karna hospital in Luxor, claiming a doctor had assaulted a preacher in Al-Azhar. Police transferred the parent to the hospital and detained the doctor.

A number of passengers of (Menouf-Ashmoun-Cairo) train gathered on April 10th after pulling its tractor.

The program has monitored 2 vigils for the social movements during April;

A number of nurses in Health Insurance Hospital in the area Hod-Dars, Suez, organized on April 6th a vigil to protest against the physical assault of a patient’s family on 2 of their colleagues.

The family of Sabrin M.I. organized a vigil in front of the Kafr El-Sheikh Courts Complex demanding the execution of the murderer in conjunction with his first trial.

Came fourth in terms of methods of social movements during April, with one case:

A number of radicals threatened on April 23rd to hold a vigil on the 26th against building a church building for prayers in Mit-Nama, Qalubia.

Only one sit-in was held during April for social reasons:

Dozens of handball players – Youth sector – and their parents held a sit-in on April 24th inside Wadi Degla 6th October club, in protest against the decision of the board of the club to cancel the activity of handball once and for all.

One case for social reasons during April:

Dozens of patients on kidney dialysis at Aswan University Hospital were injured during their dialysis sessions due to lack of supplies so they refused the sessions on April 30th.

On April 4th, the residents of Delga village in Minia complained to the Governor about the poor sanitation situation in the area.

Geographic Distribution of Labor and Professional Protests during April 2019 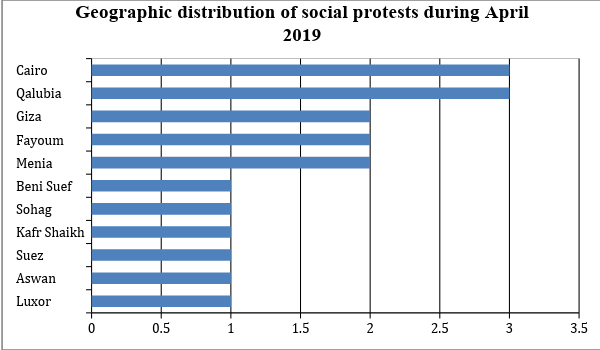 Cairo and Qalioubia topped the governorates of the Republic in terms of the number of social protests with 3protests each.

The governorates of Giza, Fayoum and Minia came in second place with 2 each.

The governorates of (Beni Suef, Sohag, Kafr El-Sheikh, Suez, Aswan and Luxor) in the third and final order with 1 protest each.

Sectorial Distribution of Labor and Professional Protests during April 2019 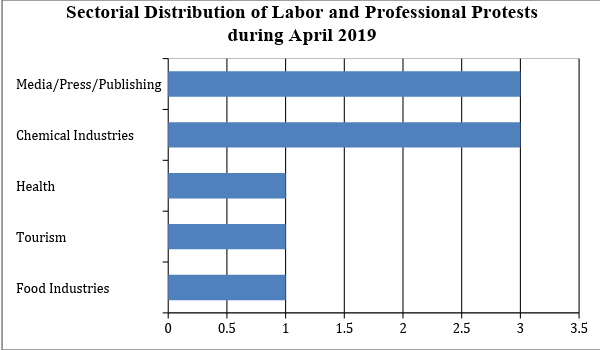 The sectors of the press, media and publishing; with the chemical industries topped all sectors of the labor and professional sector in terms of the number of protests during the month of April, with 3 protests each, while the sectors of (health, tourism and food industries) came second and final with 1 protest per sector.

The “other” sector, which includes suicides or suicide attempts that were caused of poor living conditions came first in social protests with 7 cases.

While the health, transport and communications sectors came third with 2 protests each.

Thus, from the previous presentation, it is clear that;

Both labor and social protests declined in April, which is what we believe not to be due to the improvement of the economic and social conditions, but due to the increased oppression that has been occurring simultaneously with each election on one hand, and waiting for the implementation of the government’s promises made by the President on March 30th, regarding increasing salaries and addressing the effects of inflation, as well as the promotions for employees on the other hand.

Cairo declined as the top in terms of the number of labor protests, to leave the spot for both Giza and Sharqia. Qalubia has competed with Cairo at the forefront of social protests.

There is an increasing number of protests organized by radicals against the Christians holding their prayers inside church buildings in more than one place, where one occurred in “Al-Khafir” in Sohag leading to assaulting the priest of the church and wounding another, while another occurred in Mitt Nama in Qalubia.

Program of freedom of expression of labor and social movements