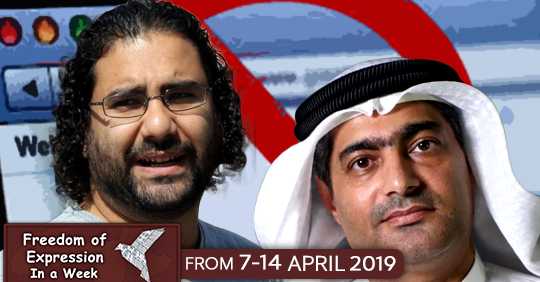 Alaa Abdel Fattah threatened because of his writings about police surveillance

Egyptian political activist Alaa Abdel Fattah revealed that the National Security Agency threatened to put him in prison again; because of his writings about police surveillance conditions which oblige him to spend his night every day at a local police station, after he served a five-year prison sentence over an opinion-related case.

On Tuesday, 9 April, hours after it was launched, the Egyptian authorities blocked “Voiceonline” website (www.voiceonline.net), which is established to gather signatures opposing the constitutional amendments that would allow the President of the Republic to remain in office.

Executive Regulation of the Cybercrime Law to be issued during April

The Law Drafting Committee of the Ministry of Communications is expected to finish drafting the implementing regulations of the Cybercrime Law during this month to put the law in effect and start enforcing it.

The Yemeni Journalists’ Syndicate announced, on April 8, the release of its report during the first quarter of 2019. The syndicate monitored 28 violations against journalists in Yemen, 17 of which were committed by the Huthis, 10 by the government and one by a single entity.

On 12 April, authorities at Al-Aroui airport Nador (a rural province in northern Morocco) prevented Nawal Benaissa from traveling to the Netherlands to take part in an international symposium on peace and protest movements in response to an invitation from the Dutch Socialist Party (PS).

Dozens of Moroccan human rights activists demonstrated in front of the Parliament building in Rabat in the evening of 10 April in protest against the harsh verdicts upheld by the Court of Appeal against Hirak Rif protesters. Demonstrators chanted slogans condemning the sentences, accusing the judiciary of not being independent and demanding the release of the detainees.

On Friday 12 April, the Israeli occupation authorities confronted, using violence and gas bombs, a peaceful march staged by residents of Bil’in village in Ramallah to protest against the new apartheid wall built in the area of Abu Limon, south of the village.

Palestinians imprisoned in Israeli jails have entered a hunger strike since 8 April after failed dialogues with prisons’ administrations. The detainees demand to lift the collective punishment imposed by the prison administration since 2014, and halt the medical negligence policy and the ban of visitation imposed on hundreds of detainees.

Security services of the Criminal Investigation released, on Monday evening (April 8), journalist Jihad Abu Baidar, one day after being detained in front of the HQ of “Jordan Today” TV channel as he was entering the building for a TV interview to speak about “stamp of gold corruption” case.

Prominent Emirati human rights defender Ahmed Mansour has entered his fourth week of the hunger strike staged to protest the prison conditions and the unfair trial he faced before he was sentenced to prison.