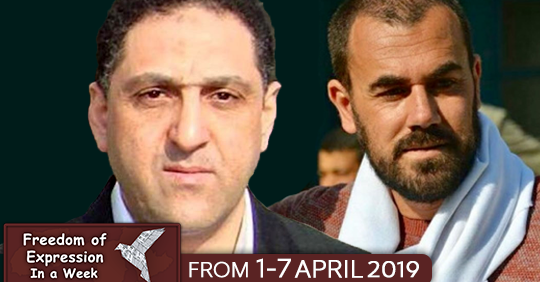 After 42 months of pretrial detention, solitary confinement and medical negligence, and after 10 days since ordering his release, journalist Hisham Jaafar actually left prison on 6 April to start a new cycle of precautionary measures.

Under unsubstantiated charges, Jafar spent three years and a half in prison.

On 7 April, Aswan State Security Misdemeanors Court handed down its verdict to the 32 defendants accused in the case known in the media as “Tambourines March” ordering each of them to pay a fine of EGP 50,000  with the suspension of the sentence. The court also ordered the acquittal of the defendants from no. 25 till the last one involved in the case.

The Court of Administrative Justice decided, on 7 April, to adjourn the lawsuit No. 39418 for judicial year 73, lodged by journalist Magdy Shandi, editor-in-chief of Al-Mashhad newspaper, demanding to overturn and suspend the implementation of the Supreme Media Regulatory Council’s decision (No. 16/2019) – on the list of sanctions and measures that apply to entities subject to the Law Regulating the Press and Media- for the May 26, 2019 hearing.

On 1 April, the Kuwaiti Court of Cassation sentenced Murad Abdulaziz Al-Jarallah to 5 years in prison with force and labor; for allegedly “insulting the emir” against the backdrop of a tweet he posted on his account in social media websites.

Appeal Court upholds sentences against Zefzafi and his companions

The court session was held in the absence of the defendants and the defense team in a way to show their objection to the course of trial.

The government is expected to refer the “Press and Electronic Media Law” to the legislature in the last week of April.

The new law requires journalist to obtain a license from the media authority in order to practice his profession, considering journalists, media professionals and reporters as a public servant.

On 3 April, the Central Court of the Israeli occupation forces turned down an appeal submitted by photojournalist Mustafa al-Kharouf’s family demanding his release and reunion with his family in Jerusalem.

On 7 April, the security services arrested journalist Jihad Abu Baidar in front of the HQ of “Jordan Today” TV channel as he was entering the building for a TV interview to talk about “stamp of gold corruption” case.

On 6 April, at least one demonstrator died of wounds sustained during a demonstration in the city of Omdurman, near al-Bashir’s residence, and by the early hours of April 7, the Central committee of Sudan doctors CCSD announced the death toll rises to five, in addition to injury of dozens.

On 7 April, Sudanese people faced great difficulty accessing popular social networking websites; WhatsApp, Facebook and Twitter, coinciding with escalating protests against the Sudanese president’s continued rule, which prompted most of them to use applications to bypass the ban. It’s worth mentioning that this is the second time the Sudanese face such ban since the beginning of the protests on the 19th of last December.

A weekly newsletter by the Arabic Network for Human Rights Information (ANHRI) addressing the most important issues and events related to freedom of expression in the Arab world.