The Democratic Path in Egypt during the First Quarter of 2019 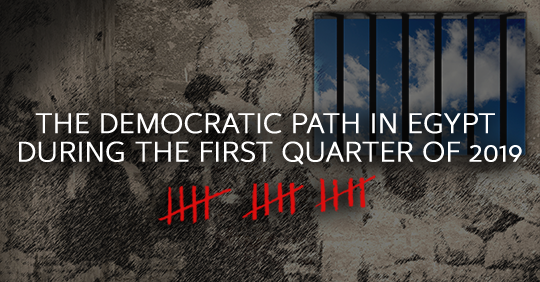 The Democratic Path is a report that is launched by the Arabic Network for Human Rights Information (ANHRI) every three months, i.e. quarterly, starting from 2018. In previous years, ANHRI used to publish the report on a monthly basis through the “Lawyers for Democracy” initiative it launches in 2014 to monitor the democratic process in Egypt.

Through a network of lawyers and mass media reports, the report monitored the practices, incidents, cases, and measures that may affect, whether positively or negatively, the democratic path in Egypt, providing an accurate picture- as far as we can- of the state of democracy in Egypt. ANHRI also issued annual reports to monitor the democratic path in 2014, 2015, 2016, 2017 and 2018, which can be accessed through the “Reports” section on ANHRI’s website by clicking on the following link:

This is the first report released by ANHRI during 2019. The first quarter of this year has witnessed the launch of campaigns by some members of the Parliament calling for amending some articles of Egypt’s Constitution. These amendments, notably, include extending the presidential term to six years.  The           period also witnessed the Supreme Media Regulatory Council’s enactment of a sanctions list of the Law on Regulating the Press and Media, which is dubbed by writers and journalists “regulations for press execution”.

Protests did not stop during the first quarter of 2019; as it saw 106 protest events organized by different political powers; social and labor protests were at the forefront with 54 protests, followed by the Muslim Brotherhood (MB) and the National Alliance to Support Legitimacy (NASL) that organized 41 protest events. Military trials of civilians continued in the first quarter of the year; as among the 53 trials held during this period, there were 6 military trials for 1,638 citizens.

Violations of media freedoms have not ceased during the first quarter of the year; with 39 cases of violations recorded, most prominently pertaining to the investigations conducted by the prosecutions which amounted to 29 during the period covered by the report.

The details of the state of the democratic path during the first quarter of 2019 are outlined, in numbers and percentages, as follows:

During the first quarter of the year, the various forces organized 106 different events, and their distribution was as follows:

The month of February came first in witnessing the largest number of protest events by 37 different protests, as shown in the following table:

Out of these different events, 29 were attacked by security forces, 62 passed without attacks, and 9 labor and social protests were resolved after negotiation.

The first quarter of 2019 witnessed the organization of 54 different social and labor protests; 5 of which were attacked by the security forces, whereas 34 passed without interference, and 15 were resolved after negotiations with their organizers.

The most important demands brought by the social and labor protests:

The MB and NASL protest events

The first quarter of 2019 saw 42 protests staged by the Muslim Brotherhood and the Alliance to Support Legitimacy, including 19 that were dispersed by the security forces, while there were 21 protests that didn’t subject to any security intervention.

The most important demands raised by the MB and NASL protest:

The first quarter of 2019 witnessed 6 protests organized by students and their families. The security forces attacked two of them, while the four others were left without any attacks.

The first quarter of 2019 witnessed 2 protests in Cairo and other governorates, all of which were to celebrate the National Police Day and to support the government’s decisions.

The first quarter of 2019 witnessed 53 trial cases that are being considered before the Egyptian Judiciary. Of these, there were 23 rulings of conviction, 13 acquittals, and 5 death sentences against 24 defendants.

The distribution of the 47 ongoing trials is as follows:

The most prominent trials of the MB and NASL are:

The most prominent trials of Mubarak regime figures are:

Cases known in the media as: (Companies’ licenses, trial of Mohamed Ahdy Fadly and others over illicit gain charges, Manipulation of the stock market, Al-Ahram gifts, Corruption of the Interior Ministry, and the trial of Ibrahim Soliman in the ‘Green Belt’ case).

The most prominent trials of democratic/ civil rights defenders are:

Cases known in the media as: (The Tambourines Detainees, the oppressed of the Downtown, trial of Al-Warraq Island’s residents, and Qasr al-Nil incidents ).

The most prominent trials of members of the post-June 30 regime are:

Cases known in the media as; (the trial of Menoufia former governor over bribery charge)

In the first quarter of 2019, the military judiciary handled 6 trials for 1638 civilians.

In the first quarter of the year, there were 23 convictions, 13 acquittals and one suspended ruling. The details are as follows:

During the first quarter, the Egyptian judiciary issued 23 convictions, distributed as follows:

During the first quarter, 13 acquittals were issued, distributed as follows::

During the first quarter of the year, only one suspended sentence was handed down during the trials of MB and NASL affiliates.

Five death sentences were issued against 24 defendants during the first quarter of 2019, as shown in the following table:

During the first quarter of 2019, Egypt’s Prison Service sector carried out three executions against 15 defendants, all were in February as follows:

The first quarter of 2019 witnessed a total of 13 terrorist operations in Egypt’s different governorates, along with 12 counter-terrorism operations, detailed as follows:

Five terrorist attacks took place in the first quarter of the year; two of them were carried out while the security forces succeeded in thwarting the three other. The operations resulted in 4 killed and 6 wounded.

The following table shows the details of such terrorist operations:

The following table shows the numbers of terrorist operations and their distribution in different governorates:

During the first quarter of the year, there were s7 preemptive attacks by the security forces which targeted what they described as terrorism hubs, resulting in the killing of 140, and the arrest of 149 others.

The following table shows the number of dead and injured

Fourth: Violation against Freedom of Expression and Media Freedoms:

The first quarter of the year witnessed 39 violations against freedom of expression and media freedoms.

The following table shows the number of violations throughout the first months of 2019:

Details are as follows:

– On 5 January 2019, Cairo Criminal Court decided to refer Mohammed al-Baqer, director of the Adalah Center for Human Rights, Ahmed Abdellatif, lawyer at the Arabic Network for Human Rights Information, and Shorouk Salam, lawyer at the Belady Foundation, to a disciplinary court; because they proved their withdrawal from attending the detention renewal hearings before the court.

– On 5 January 2019, Cairo Criminal Court renewed the detention of journalist Hesham Jaafar, head of ‘Mada’ Foundation for Media Development, for 45 days pending investigations into case No. 720 of 2015 State Security, in which he faced charges of joining a terrorist group and receiving an international bribery. On 26 March 2019, the court ordered Jafaar’s release on probation.

– On 9 January 2019, Cairo Criminal Court sentenced political activist Ahmed Douma to 15 years in high-security prison and ordered him to pay six million Egyptian pounds for damages, in his retrial into the case publicly known as “The Cabinet incidents”, in which he faces charges of; participating in a gathering for the purpose of committing acts of terrorism, arson, vandalism of public and private property, and protesting without prior notice.

– On 9 January 2019, the Supreme State Security Prosecution decided to renew the detention of human rights lawyers Ahmed Sabry Abu Alam and Sayed al-Banna for 15 days pending investigations into case 62 No. of 2018 State Security, in which they are charged with colluding with a terrorist group to achieve its goals and spreading false news and statements. The two lawyers have still been held on remand so far.

– On 10 January 2019, the Supreme State Security Prosecution decided to hold engineer Yehia Hussein Abdel Hady in detention for 15 days pending investigations into case No. 277 of 2019 State Security, on charges of joining a terrorist group, misusing one of social media means and providing financial support to terrorist groups

– On 11 February 2019, the Supreme State Security Prosecution decided to renew the detention of rights lawyer Mohab al-Ebrashi, pharmacist Gamal Abdel-Fattah, and activists Khaled Abdel-Galil and Khaled Bassiouni for 15 days pending investigations into Case No. 1739 of 2018 State Security on charges of; joining a terrorist group, broadcasting false news and statements, and using Internet personal accounts with the aim of committing a crime that is punishable by law and disturbing public order.

– On 13 February 2019, Omranyia Prosecution decided to hold journalist Ahmed Gamal Ziada in detention for the next day (until reaching a decision), after interrogating him into Case No. 67 of 2019 State Security Misdemeanors on charges of publishing false news and statements via the social networking website “Facebook”. The next day (February 14), Omranyia Prosecution decided to detain the journalist for 4 days pending investigations into the aforementioned accusation, and on 16 February 2019, the opposition judge in Omranyia Misdemeanor Court decided to renew the detention of Ziada for 15 days pending investigations into the aforementioned accusation. Then, on 2 March 2019, Omranyiah Misdemeanor Court ordered the release of Ziada on bail of EGP 10,000.

– On 19 February 2019, Montazah Prosecution renewed the detention of human rights lawyer Mohamed Ramadan for 15 days pending case No. 16576 of 2018 Montazah, aka “The yellow vests” case, on charges of joining a terrorist group, spreading false news and inciting protests. Ramadan’s pretrial detention is still being renewed until now.

– On 19 February 2019, Zagazig Prosecution decided to hold lawyer Ahmed Mouad in detention for 15 days pending investigations into case No. 532 of 2019 Zagazig Administrative, in which he is charges with joining a terrorist group, promoting its views and possessing publications. Mouad’s pretrial detention is still being renewed until now.

Note: This report is based on the cases monitored by ANHRI and does not necessarily include all the incidents took place throughout the month.

To view the Democratic Path Report in 2014, “Obscure and stalled”

To view the Democratic Path Report in 2015, “One step back, two steps further back”

To view the Democratic Path Report in 2017, “Very Steep”

To view the Democratic Path Report in 2018, “Mounting Anger”