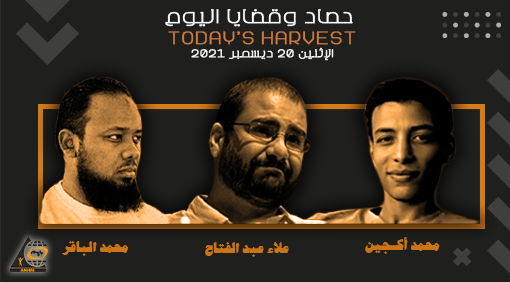 Issued decisions
– The First Terrorism Circuit at Cairo Criminal Court adjourned the trial of Mohamed Badie, the Supreme Guide of the Muslim Brotherhood group, and Mahmoud Ezzat, the group’s acting guide, along with 77 defendants in the case known in the media as “Al Manassa incidents” for the hearing of 19 January, to hear the defense pleadings and inquire from the ambulance cars’ owners about the damages.
– The Fifth Settlement Emergency State Security Misdemeanor court sentenced blogger Alaa Abdel-Fattah to 5 years in prison, and human rights lawyer Mohamed El-Baqer and blogger Mohamed Ibrahim, aka “Oxygen”, to 4 years in jail in connection to Case No. 1228 of 2021 State Security Misdemeanor.
Unresolved decisions:

– Cairo Criminal Court has considered the trial of 8 defendants in the case known in the media as “spying for ISIS”.