Why did Egypt fall to 136th out of 139 countries in the rule of law?! Two years have passed since the attacks on Gamal Eid, and the Public Prosecution Office is part of the crisis 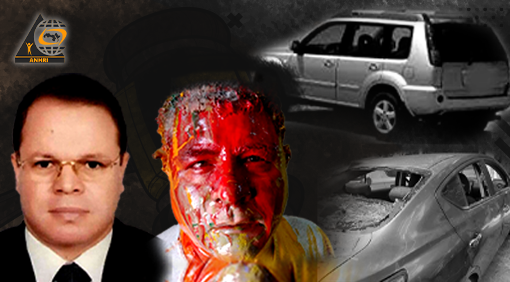 He did not anticipate that the theft of his car was the first episode in a series of vicious terrorist attacks against him.

The Nissan X-Trail was stolen.

At about six in the evening, from Algeria Square, below the headquarters of the Arab Network, by loading it to a rescue winch on which the Al-Batal Rescue Company recorded it, many cameras spotted it.

It was reported, the cars theft police unit moved actively, and then, after a few days, the search was suspended completely.

– The Public Prosecution office neglects Gamal Eid’s requests to ask the Basateen investigation officers for falsifying a report and lying in the investigations.

– This incident involved “six people carrying firearms”, 2 pistols, a car, a motorcycle, and a radio. As a result, Gamal Eid was broken, and the formal investigations were halted.

At dawn on October 31, Gamal Eid woke up to find that the car he had borrowed from his colleague in the Arab Network, which was standing next to the house, had been completely smashed, and witnesses said that three people carrying pistols and radios got out of the car at dawn and completely smashed the car, and set off! ! The police station falsifies the report of the incident again, and records it as a infraction!!! The prosecution reserves the case.

About 10 people, including a state security officer who is well known for Gamal Eid, attack Gamal Eid in the morning next to his house while trying to get a taxi to go to the headquarters of the Arab Network.

They beat him, pour wall paint on him, photograph him, and telling him: “This to deter”, When some passers-by step in to defend him, they point pistols at them, saying: “Go away, go away.”

– After an argument with members of the Maadi Public Prosecution, the Public Prosecutor “Walid Al-Fateh” and the Chief Prosecutor “Mustafa Al-Matnawi”, the prosecution begins the investigation, but after promising to move to inspect the incident, it reneges on the implementation of its promise, time passes, then it assigns the inspection to the officers of Al Basateen police station!! Although they are accomplices and it was better to investigate them.

Two years after the incidents of criminal attacks, which are considered as terrorist crimes, and as a result of unfair formal and incomplete investigations, the criminals are still free. This takes place because of the Public Prosecution and the Attorney General himself wasting law, in a way that facilitated impunity for a terrorist crime. At the same time, the same Public Prosecutor decides to imprison hundreds, if not thousands, of terrorism-related charges without evidence or a crime committed by these innocents, but only based on an investigation memorandum written by a State Security officer. It was one of them, a state security officer, who led the terrorist incident against Gamal Eid.

The Arabic Network feels very sorry when it announces that the Public Prosecution, during the era of the current Attorney General, “Hamada El-Sawy”, has become part of the justice crisis in Egypt. Its performance is disappointing and frustrating to those seeking the rule of law and justice. Where many opponents and critics are deprived of serious investigations and justice when they are victims of violations and attacks, innocent people are even imprisoned on fabricated charges, and many of them exceed the maximum limit of pretrial detention period. While the official and private media that are under the control of the security services come out and claim that the country is governed by the rule of law!

However, this no longer deceives anyone with a mind, and explains why Egypt declined in the list of the Rule of Law Index of the World Justice Project (WJP) to rank 136 out of 139 countries included in the index.