Five rights wasted in the prisons’ law; About the Prisons Organization Law No. 106 of 2015 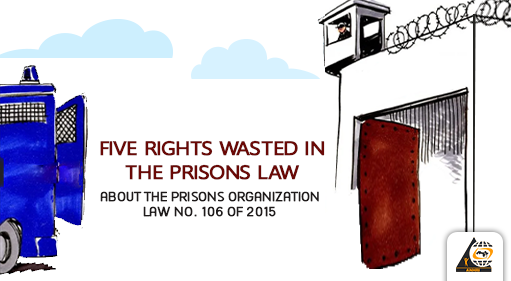 In accordance with the Egyptian law and legislatures, it is assumed that the purpose of establishing prisons is correction, reform, and implementation of freedom-depriving punishments. Prisons are supposed to be under judicial supervision, and that the main objective of them is to care for the convicts and rehabilitate them socially and culturally.

Unfortunately, however, the Prisons Authority administration often ignores the implementation of the provisions of the Prisons Law “especially Law No. 106 of 2015” and its provisions. This happens despite that no matter who the detainee is and whatever crime he/she has committed, this does not prevent him/her from obtaining the human rights guaranteed in accordance with the Egyptian constitution, internal laws and charters. and international treaties in this regard.

Imprisonment is not a justification for violating any of the basic human rights, or failing to implement or violate them for the purpose of further punishment.

Despite the presence of many articles in the Prisons Organization Law that established rights for prisoners, whether related to food, the right to clothing and drink, medical care, visitation, correspondence, communication with relatives, sports and other rights that should be respected by the prison administration, many of these rights are denied to some prisoners and detainees, especially in political cases.

The articles of this law only serve as a subject to review in local or international forums, without finding their way to implementation on the ground.

The Prisons Organization Law and its amendments included many rights such as:

1- Article 16 allows pre-trial detainees with financial capability to order the food they need from outside the prison or buy it from inside the prison. This also applies to those imprisoned for a short period of time after the approval of the Public Prosecutor based on Article 17.

2- Article 20 obligates prison administration to treat pregnant prisoners in a good and distinguished manner, especially in terms of food, employment and sleep until 40 days after the end of pregnancy, and providing them with the needed health care, clothing and rest.

3- Based on article 24, it is not allowed to ask pre-trial detainees and those sentenced to simple imprisonment to work.

4- Imprisoned and detainees may, at their expense, bring books, newspapers and magazines, according to Article 30.

5- It is permissible to release any convict who is found to have a disease that threatens his/her life or exposes him/her to disability. Article 36

7- The convict may be released after three quarters of the period if his/her behaviour stir confidence in correcting himself/herself, and in case the release is of no threat to public security, Article 52

Some rights guaranteed by Law No. 106 of 2015 for prisoners and detainees:

1- Article 14: pre-trial detainees may stay in distinguished rooms for a sum of money of no less than 15 pounds per day.

2- Article 20: A woman with children under her custody may request that the child stays with her in prison until the age of four years.

3- Article 34: A prisoner who is unable to work, according to his medical report, may be transferred to a public prison and not to work until his/her health issues are removed.

4- Article 38: It is permissible for every convicted prisoner and every remand prisoner to correspond with his relatives and his family and to contact them by telephone for a fee, and his relatives have the right to visit him twice a month

5- Article 38: visitors must be treated humanely, guaranteeing them suitable places to wait and visit.

6- Every prisoner has the right to file a complaint freely and in full confidentiality to the Assistant Minister of Interior for the Prisons Authority Sector or whomever he delegates.

Here comes a review of some practices that violate these rights:

As Egyptians say “forget it” this right was granted only to the regime supporters and those close to them. As for the opponents, their share is to sleep on the ground and in an area not exceeding “two hands pans and a fist” and it may be less ( ) .

On the contrary, we hear about cells in which the symbols of the former regime stay; they are more like luxurious hotel rooms, as described by the musician Hani Muhanna about the luxurious conditions of his imprisonment, while prisoners of conscience are deprived of such conditions. ( )

Article 38 of the law stipulates that prisoners have right to visitations by families twice a month, and to correspond with them.

Article 38 guarantees the prisoners’ right to phone calls, and sets a single condition for this, which is “that it should be at the expense of the prisoner or the detainee.”

In fact, some of the search results indicate that seizing a phone or trying to bring in a phone to prisoner could be referred to court and result in imprisonment of those who tried!!

These are questions the Ministry of Interior will not answer, and the media close to the Ministry will ignore them, especially when most of the Egyptian media outlets are close to it. They will only mention the right granted by the law while responding to criticism of the ministry’s mal-practices in prisons, and not as a practice to guarantee the prisoners can really enjoy this right.

Article 14: “pre-trial detainees shall be resided in places separate from the places of other prisoners. A remand prisoner may be authorized to reside in a furnished room in return for an amount of money determined by the Assistant Minister for the Prisons Authority Sector, not less than fifteen pounds per day, taking into account what is permitted by places and tasks in prison, and in accordance with the procedures and rules that determined by the bylaw.”

Article 43 of the law, clause (5), states: “Solitary confinement for a period not exceeding thirty days.”

This is about the law, where solitary confinement is a punishment, not a normal measure that can be taken against a prisoner or detained person.

But the reality is one thing, and the law is another; many reports, and even cases, are being witnessed by the courts to stop the expansion of solitary confinement, starting with Ahmed Douma, Dr. Abdel Moneim Aboul Fotouh, Muhammad al-Qassas, and former prisoner of conscience Shadi al-Ghazali Harb.

Only to adhere to the law and respecting it by the interior ministry, and for the general prosecutor not to neglect the reports and complaints submitted regarding the violations of prisoners’ rights.

Testimony of former prisoner of conscience Abdullah Yahya for BBC Arabic on May 10, 2021 ; Last visit to the website on July 20, 2021

the news is published in BBC Arabic under the title; Hani Muhanna: Anger because of the Egyptian composer’s statements about the conditions of his imprisonment with Mubarak’s two sons, on 11 January 2021. Last visited on 20 April 2021  https://www.bbc.com/arabic/trending-55622948

The press release published on the Egyptian Initiative for Personal Rights website entitled (The Prisons Authority is obligated to enable detainees to contact their families and lawyers by phone, and the Ministry of Interior should develop a plan to allow visits to prisons after a three-month suspension