In prison, outside the law … A campaign by ANHRI exposes the waste of justice and law in prisoners of conscience exceeding the maximum pretrial detention limit 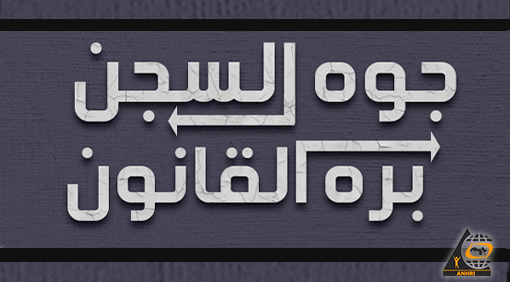 The Arabic Network for Human Rights Information (ANHRI) is starting today, and for a month ahead, a campaign to demand the release of prisoners of conscience who have exceeded the maximum limit of pretrial detention prescribed by law and the Constitution. The campaign, which is entitled “In Prison and Outside the Law”, introduces, on a daily basis, examples of prisoners of conscience who reached the two-year legal limit for remand detention, regardless of whether or not they were rotated; since ANHRI, along with any fair-minded person or impartial legal expert, refuses to acknowledge the abominable phenomenon of rotation (adding defendants to new cases), which has appeared to circumvent the law and to continue punishing prisoners of conscience using pretrial detention.

ANHRI believes that the Public Prosecutor, specifically the State Security Prosecution, is primarily responsible for violating the freedom and rights of Egyptian citizens, journalists and politicians, either through prolonged pretrial detention or the abhorrent rotation. The State Security Prosecution usually orders the release of prisoners of conscience but instead of implementing the release order, it re-detains them over the same previous (unsubstantiated) accusations, without evidence in most cases. They are losing their lives and freedom in prison, as punishment and in retaliation for their political stances, affiliations and views, which don’t appease the authorities in Egypt.

Gamal Eid, ANHRI’s director, said: “Remaining silent on the trampling of law and the undermining of the freedom, health, and even the lives of prisoners of conscience by ordering the continuation of their (basically unjustified) detention for periods exceeding two years is no longer possible.  We note here the case of photojournalist Shady Habash who died in prison after 37 months behind bars, meaning that he died during the third month of his illegal detention. Indeed, pretrial detention- and rotation- is a dark spot in the history of justice in Egypt, and needs to be stopped immediately.”

ANHRI hopes that the Public Prosecutor responds to the call of duty and the law, and issues an immediate order to stop the underestimation of the law and promptly release every prisoner of conscience in Egypt, especially those who have exceeded the maximum two-year period of pretrial detention. Examples of those prisoners and detainees: Zyiad El-Eliemy, Abdel-Moneim Abu al-Fotouh, Mohamed al-Qassas, Mohamed Ramadan, Mohamed al-Baqer, Badr Mohamed Badr, Yehia Hussein Abd al-Hadi, Mohamed Oxygen, Ibrahim Metwally, Haitham Muhammadein, Aaisha al-Shater… and others, whether they are included in the campaign or not.