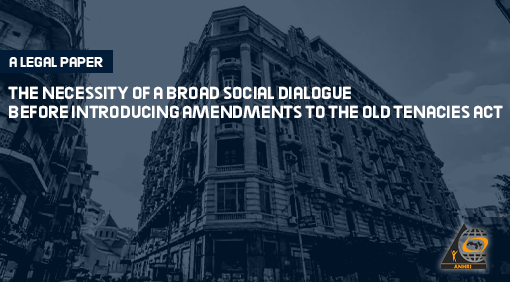 One example of the concerns that occupy the tenants aroused by the statements of of the engineer Ala Wali, Chairman of the Housing Committee (in the previous Parliament) as he said: “The Committee has not yet received the draft amendment to the Old Tenancies Act and it has not been sent by any Government authority. The Committee emphasizes that it is awaiting the submission of the Bill as it is one of the most dangerous laws to be discussed by and awaiting access to the Housing and Utilities Commission.”[1]

He added: “This law is one of the important laws that concern millions of Egyptians, and the housing committee will take into account the social and human dimension of both the owner and the tenant. The committee will examine all the proposed amendments with precision and balance so that no one is subjected to injustice.”

The report of the population, establishments and buildings census in Egypt revealed, as confirmed by these results, which were announced on the morning of September 30, 2017, that there are 22,973 thousand units of ordinary buildings designated for housing, representing 52% of the total units of ordinary buildings, and also 9.3% of the total building units, used for business, 0.4% for residence and business together [3] .

The results of the Egypt Census 2017 also revealed the presence of a large number of closed housing units in Egypt, because either there is another home for the family or other reasons, in addition to the empty housing units “completed construction, or without finishing, which need to be restored, amounting to 12 million and 498 thousand units, with a percentage of 29.1% of the total number of units in Egypt[4].

Therefore, “a state of anticipation prevails in the Egyptian street, especially the owners and tenants, of what the new parliament will do with the draft amendment to the old rent law, or what is known as the “draft law regulating the relationship between the owner and the tenant.”

This comes at a time when some experts have stated that just discussing this law is going into a minefield, as it deals with the affairs of millions of Egyptian families, but leaving the matter as it is exacerbates the problem, and the sufferings of tenants and owners alike, everyone complains and grumbles, especially of the rental relationship, as well as the problem of extending the lease contract to the heirs of the tenant.[5]

The latest developments in the issuance of the law:

Indeed, ideas and projects were put forward about the rent law, including:

The Secretary of the House of Representatives Housing Committee explained that the bill aims to amend only 6 articles in Law 136 of 1981 that allow adding cases to vacate the rental unit if it is closed for a period of 3 years for non-travel purposes, or the same period has passed since the issuance of a new building permit in the name of the tenant or his wife or his minor children, or his benefit from obtaining a house from the housing programs offered by the state, in addition to editing the original contract 50 years after the start of the original rental relationship for the leased property; Which means restricting the right to inherit the rental relationship for this period, while setting a minimum rent of 200 pounds for residential units, and 300 pounds for administrative units, or 50% of the value of the legal rent taken as the basis for calculating the real estate tax for the same unit, which means that the rent increases with the improvement of the living standard of the inhabitant, or the case of the unit itself, as well as a gradual increase in the rent by 10% annually, with the establishment of a fund to support the incapable tenant, the proceeds of which will be from the proceeds of the real estate tax resulting from the vacated units in accordance with the law for a period of 5 years, which is the same proposal in the amendments of the Ministry of Housing that were since long years.

The Constitution of the Arab Republic of Egypt, which was amended in 2014, refers to the right to housing in Article (78):

{The state guarantees the citizen the right to adequate, safe and healthy housing, in a manner that preserves human dignity and achieves social justice.

The state commits to developing a national housing plan that takes into account environmental privacy, ensures the contribution of self and cooperative initiatives to its implementation, and regulates the use of state lands and the provision of basic utilities within the framework of comprehensive urban planning for cities and villages and a strategy for population distribution, in order to achieve the public interest, improve the quality of life for citizens and preserve the rights of future generations. The state is also committed to developing a comprehensive national plan to confront the problem of slums, including re-planning, providing infrastructure and facilities, improving quality of life and public health, and ensuring the provision of the necessary resources for implementation within a specified period of time. }

Egypt is also a signatory to the Universal Declaration of Human Rights (1948), where Article 25/1 of it states the following:

Every person has the right to a standard of living adequate for the health and well-being of himself and his family, including food, clothing, housing and medical care, as well as necessary social services, and the right to security in cases of unemployment, sickness, disability, widowhood, old age and other loss of means of subsistence as a result of circumstances beyond his will. }

3- The International Covenant on Economic, Social and Cultural Rights:

Article11:
The states parties to this covenant recognize the right of every person to an adequate standard of living for himself and his family, which meets their needs in terms of food, clothing and shelter, and his right to a continuous improvement of his living conditions. The States Parties undertake to take the necessary measures to give effect to this right, recognizing in this regard the fundamental importance of international cooperation based on consent, etc…

That is, the right to shelter (housing) is a right guaranteed to the family and individuals to protect them from homelessness and arbitrary expulsion from their homes.

The most important legislation issued in the field of housing includes a series of rent reduction laws, including:

Law No. 657 of 1953, Law No. 564 of 1955, Law No. 168 of 1961, Law No. 7 of 1965, and the legislation on rent determination committees, and restricting the freedom of the relationship between the owner and the tenant. The result of the stability and decline in rental value was the failure of the owners to maintain their buildings properly, which in turn led to the deterioration of the construction condition of the buildings, the decline in their real estate value and the decrease in their life span, and thus leads to the deterioration of real estate wealth and an increase in the housing deficit. The owners’ reluctance to carry out maintenance is due to their lack of motivation to carry out these tasks, in addition to the fact that the net property revenue is usually not sufficient to carry out maintenance, on the one hand. On the other hand, the tenants do not usually extend their interest beyond the boundaries of their housing units.

1 – Law No. 49 of 1977 in the matter of renting and selling premises and regulating the relationship between the lessor and the lessee.

This is just an overview of the legal protection guaranteed by laws and rulings of the Supreme Constitutional Court, to the right to housing.

The social dimension of the housing issue

“The right to adequate housing means more than providing a roof under which a person can live. It is the right to lead a safe and dignified life in a decent home.

Not all persons can enjoy this right. More than a billion people still live in substandard housing and in informal settlements. Every year, millions of people lose their homes and experience displacement as a result of development projects, conflict, natural disasters and the climate crisis. Many of them are subjected to forced evictions. Housing is increasingly seen as an investment opportunity, rather than a social benefit and basic human right.

And because adequate housing represents one of the necessary needs of modern man. Rather, the right to housing is an essential component of the individual’s rights approved by international conventions, and it is one of the basics of protection and care that the state gives to the individual, as it comes in the next rank after providing food and clothing, hence the importance of housing as one of the main pillars for the security of any society.

Therefore, the state should provide adequate housing for citizens with low and medium incomes, suitable for their limited financial capabilities, in a manner that preserves their humanity and dignity, and guarantees them a safe and dignified life … It also has a duty to protect legitimate housing relations from attempts by some to attack tenants by making malicious amendments to stable housing laws for years, with the purpose of timing the rental contract, and expelling residents from their homes to reap profits from them.

The greatest fear is that when the wishes of some landlords are fulfilled, the rental value will be raised for a period of time (five or even ten years), and this period will increase the rent value, which is beyond the financial capabilities of the elderly and pensioners (and the number of residents in the proposed rental apartments to increase their rent and then cancel their rental contracts to live in the streets, with a total number of nearly twenty millions), which will result in widespread social turmoil, and the resulting chaos or social conflict.

We recall here what happened in the wake of the application of such a law to the tenants of agricultural lands under the famous law of clashes and social protests, which are needless in the country.

1 – The necessity of presenting all draft amendments to the law on the relationship between the owner and the tenant for a real broad social dialogue before submitting to Parliament, through:

A – Political parties of all kinds, diversity and orientations.

C – Holding hearings in Parliament before discussing the project in the general committee, in which the parties to the rental relationship, including owners and tenants, are represented in proportions commensurate with their relative weight in society, and an appropriate number of experts concerned with housing issues, social sciences, and international organizations interested in the subject are represented.

D – Opening the widest transparent and fair dialogue in the various media, audio and video, and the print press, in which different and multiple opinions are presented and not one opinion for any party.