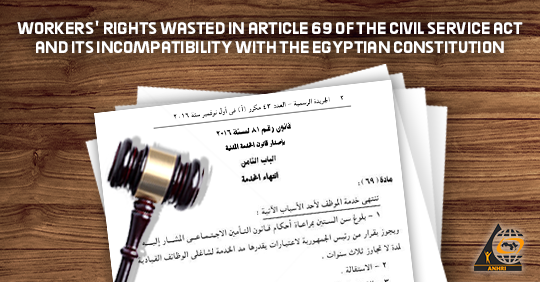 On 1 November 2016, the Parliament passed Act No. 81 of 2016, known as the Civil Service Act, to repeal Act No. 47 of 1978 on civil servants in the State. Some of the provisions of the Act, namely article 69, give the administration the right to dismiss workers arbitrarily and in contravention of the path laid down in the State Civil Workers Act “47 of 1978,” in order to ensure the progressive use of penalties in the interests of the rights of employees and in violation of the Egyptian Constitution. Since Act No. 47 of 1978, “The Civil Workers Act of the State,” guarantees in its articles the guarantees and rights of employees, explicitly establishes the legal means for the imposition of a penalty against an employee and the non-imposition of the penalty of dismissal on an employee in specific circumstances, in certain ways provided for by the Act, and provides for 10 penalties prior to the imposition of the penalty of dismissal. In text:

“Disciplinary sanctions that may be imposed on employees are:

(2) to postpone the due date of the allowance by more than three months.

(3) pay deductions of up to two months per year. The penalty may not exceed one quarter of the monthly salary after the part that may be seized or waived by law.

(4) denial of half of the periodic allowance.

(5) suspension for more than six months with half pay.

(6) deferral of promotion upon eligibility for no more than two years.

(7) pay reduction within the limits of a premium.

(8) reduction to a job in the immediate lower grade.

(9) the reduction to a lower-level job directly while reducing the salary to the level it was before promotion.

For those in senior positions, they are subject to the following sanctions:

Nevertheless, in enacting Act No. 81 of 2016, the legislator repealed Act No. 47 of 1978, including the rights and guarantees that protect an employee from the imposition of a penalty for dismissal, specifically article 69, section 5.6, of the Civil Service Act, to decide whether to dismiss an employee without a disciplinary procedure, which provides that:

“Article 69 of the Civil Service Act No. 81 of 2016 Staff members terminate for one of the following reasons:

This is in violation of article 14 of the Egyptian Constitution, which provides that an employee may not be dismissed without a disciplinary measure.

This paper seeks to clarify the contravention of granting the administration the sanction of dismissal provided for in article 69 of the Civil Service Act of 2016, in particular article 69 (5, 6 and 9), which is incompatible with the provisions of the Constitution, the Universal Declaration of Human Rights and the International Covenant on Economic and Social Rights.

First: Guarantees given to civil servants and gradual sanctions abolished by the State:

In Act No. 47 of 1978, the Civil Servants Act, which was repealed by the Civil Service Act, No. 81 of 2016. Articles 78 to 83 of the Civil Service Act, contain the legal means of imposing sanctions on workers, which begin with the gradual imposition of a penalty, which begins with a clear warning, then postpones the due date of the allowance, deductions from pay, denial of half the allowance, suspension of work for a period of up to six months, with half pay, and postponement of promotion, the reduction of the salary within the minimum allowance, the reduction to a lower-level post and the reduction to a second-level post, as well as the reduction of the salary then a pension referral until it ends of dismissal.

According to the Act, a penalty may be imposed for more than three days, only after an investigation by the competent authority, after which it is referred to the administrative authority, “In high-level posts,” which is not available in the new Code, article 69, of which provides that the employer may impose a penalty of dismissal other than the disciplinary procedure in disregard of all previous sanctions.

Second: The provisions of article 69 (5, 6 and) of the Civil Service Act are contrary to the Egyptian Constitution and international instruments ratified in Egypt.

Article 14 of the Egyptian Constitution provides that:

(Public functions are the right of citizens on the basis of competence, without favor or mediation, and are entrusted to those who carry them out in the service of the people. The State guarantees their rights, protection and performance of their duties in the interests of the people.

However, the Civil Service Act No. 81 of 2016, in articles 5 and 6, expressly provides for dismissal without reference to disciplinary methods:

Article 69, section 5, of the Civil Service Act provides that:

“The service of the staff member shall be terminated for one of the reasons, including the unauthorized suspension of 15 consecutive days unless, within the following 15 days, he or she proves that the interruption was on an acceptable excuse.”

Article 176 of the implementing regulations of the Civil Service Act No. 81 of 2016, “If a staff member breaks out of work without permission for 15 consecutive days, and within the following 15 days he or she fails to prove that his or her interruption was on an acceptable excuse, or if the staff member breaks out of work without permission for 30 non-related days per year, even if he or she is punished by a disciplinary penalty, the competent authority or who is authorized him shall terminate his or her service from the date of his or her continuous suspension, or from the day after the completion of the non-related interruption.

Item 6 – Absence from work without permission for 15 consecutive days unless, within the following 15 days, s/he provides proof that the interruption was on an acceptable excuse.

In other words, the legislator considers that a staff member’s absence from work for 15 consecutive days, or 30 separate days – should lead to the termination of his/her service without need for prior notice or procedure before the termination decision is made in the implementing regulations of the Civil Service Act.

A: The case of mandatory termination of work as soon as the interruption has been achieved:

– The legislator made termination compulsory and mandatory by simply the absence from work for 30 unrelated days a year without permission, which inevitably leads to termination even if the employee’s absence is justified.

B: Status of termination pending on the condition that:

– The case of unauthorized layoffs leads to 15 consecutive days of termination unless:

1- The employee shall prove that the interruption was on an acceptable excuse such as illness, travel or otherwise.

2- The staff member shall submit such an excuse to his or her employer and within a maximum of 15 days following the suspension. If s/he goes beyond it, the decision to terminate is enforceable.

Article 69 of the Civil Service Act authorized the implementing regulations on termination procedures and rules.

– The employer has the right to terminate service, even if the employee has been sanctioned on a disciplinary basis. The termination date shall be deemed to be in the case of a non-connected absence from the day after the completion of the non-related layoffs and from the date of the suspension of the caller as provided for in article 176 of the Regulations.

Dismissal in violation of the Constitution

The legislator has left the excuses for dropping out of work without specifying what they are. He refers to them in absolute general terms, which are governed by the general rules. This means that, in violation of article 14 of the Egyptian Constitution, which explicitly stipulates that employee may not be dismissed without a disciplinary procedure, the law requires the dismissal of an employee without recourse to the disciplinary procedures provided for in article 14 of the Egyptian Constitution which states:

When a law comes to replace the other, the newest must be more just and equitable in terms of guarantees, it was supposed to maintain or modify them for the better, to give the workers further guarantees, not to detract from the rights already given, not to violate the Constitution’s provisions.

Where are the guarantees of the employee under this law, which, in accordance with article 14 of the Egyptian Constitution, only grants the competent administration the right to accept an excuse for an employee who was absent from work under any circumstances beyond his/her control. These amendments are not constitutional in accordance to article no. 14: “They shall not be dismissed except in the manner prescribed by law. ”

Article 23/1 of the Universal Declaration of Human Rights states:

The previous provision provided for the right to work and stated that work should be on fair and satisfactory terms, which would protect a worker from being dismissed.

Contrary to Act No. 81 of 2016, which gives the right to the employer to dismiss an employee without warning, these conditions are unfair.

” The States Parties to the present Covenant recognize the right to work, which includes the right of everyone to the opportunity to gain his living by work which he freely chooses or accepts, and will take appropriate steps to safeguard this right.”

“The Court of Cassation shall rule on the validity of the decision to dismiss the worker and whether the employer is or is not arbitrary in accordance to the circumstances surrounding at the time of his issuance.”.

The Court of Cassation also decided:

“To assess the justification for the dismissal of a worker and the fact that the Court of Appeal has ruled on the merits. If the Trial Court has concluded, within its discretion, what it has done, and evidence driven that the penalty for the dismissal of a person against whom s/he is challenged is disproportionate, makes his/her dismissal arbitrary, then the appeal against the contested judgment is unfounded.” .