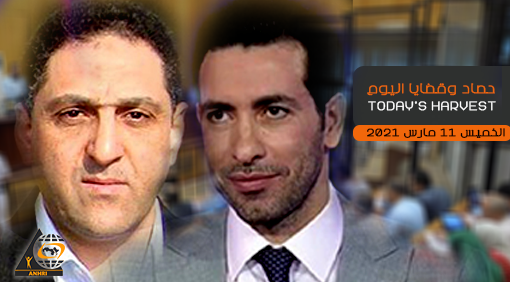 Issued decisions:
– Cairo Economic Appellant Court adjourned the consideration of the lawsuit demanding to cancel the decision to liquidate the Egyptian Iron and Steel Company. The case was postponed for the hearing of 23 March 2021 to allow the defense team to extract an official copy of the minutes of the company’s Extraordinary General Assembly meeting held on January 11th from the Investment Authority.
– The Court of Cassation upheld the ruling issued by the criminal court to place journalist Hesham Jafar and former Egyptian national team player Mohamed Abu Trika, along with 1,527 members of the Muslim Brotherhood group on the Terrorists List for a period of 5 years ending on the first of May 2023.
– The Court of Cassation set the appeal submitted by the defendants in the case known in the media as “the high pressure towers bombing cell” for adjudication at the hearing of 10 June 2021.
– Giza Criminal Court’s 2nd circuit sentenced one defendant to 15 years in high-security prison into his retrial procedures in the case of “The raid on Atfih police station”