April saw at least 50 labor, professional and social protests in parallel with the efforts of workers and social movements to build their own independent organizations that express their will and interests.

April also witnessed a conflict between the workers’ will to modify independent unions that emerged following the revolution of January 25th 2011, that represent the workers’ needs and demands, and the Egyptian authorities represented by the Ministry of Manpower, which is working tirelessly to obstruct the efforts of these unions in accordance with the law no. 213 of 2017 known as the Law of trade union organizations and the right to organize.

In spite of the many shortcomings of the law in violation of the right to organize, this did not satisfy the greed of the executive power to control those labor organizations.

The program monitored (50 protests) during the month of April, among which 16 were labor and professional protest, and 34 were social, summarized as follows: 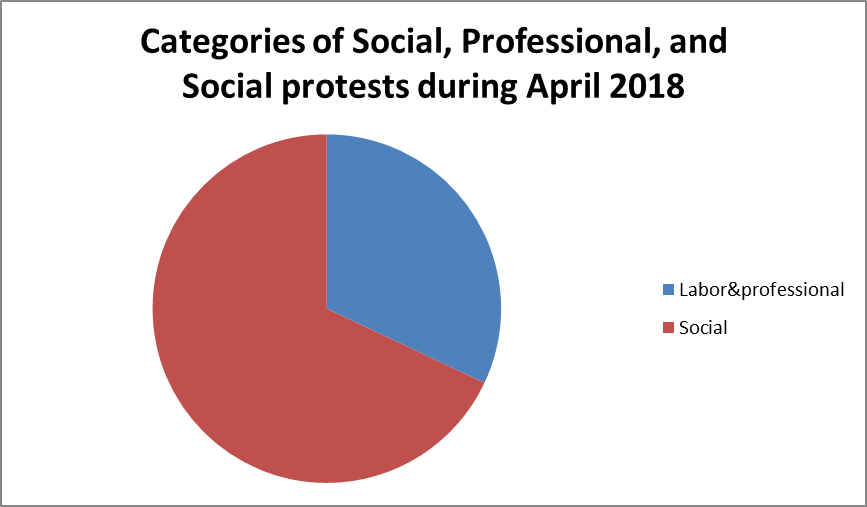 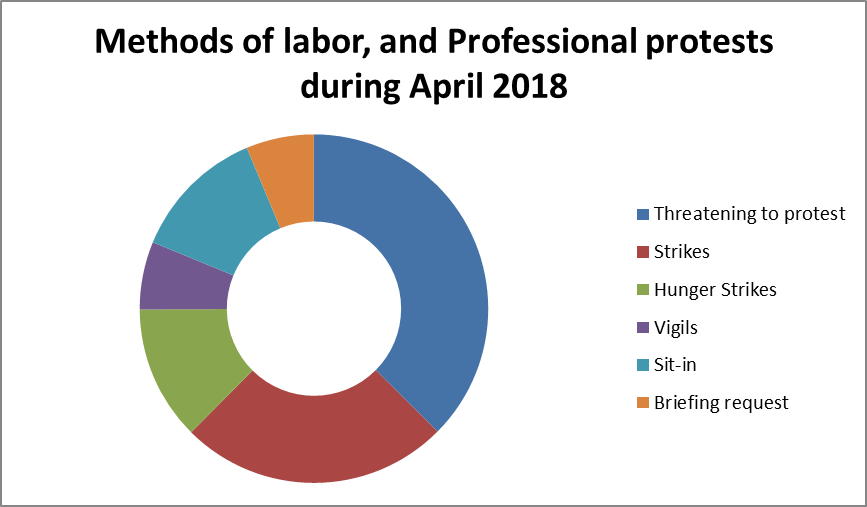 April witnessed six cases of protest, where workers at Maspero threatened to protest against the proposal to deduct 3% per month from the salaries of employees, in order to provide liquidity for the payment of due pensions.

A poll organized at the doctors syndicate revealed that 85% of the respondents agreed to organize a partial strike in the hospitals to protest the doctors’ bad situation and to declare their support for the doctor Mohammed Hassan, who is accused of obstructing justice and dealing improperly with the prosecution after being a witness in a case.

An ambulance driver threatened to commit suicide from the highest tower in Esa’af area in Cairo, after intransigence and refusing his request to move to another governorate closer to his residence.

Employees of the Real Estate Department of the Ministry of Justice also threatened to strike for work because the law was not implemented regarding the incentive for excellence after obtaining scientific degrees.

Workers of the Qena Spinning Factory threatened to resort to an open sit-in and strike because of the lack of treatment for workers suffering from chronic diseases.

Female workers at the school Nutrition factory in Fayoum threatened to strike inside the factory because their financial rights were not paid.

April witnessed 4 strikes. Dozens of female nursing technicians in the French Hospital of the University of Tanta entered into a strike to protest the arbitrariness and ill-treatment of the administrative director, and Gharbia Directorate police forces intervened to stop the strike.

Dozens of employees of the security department at the University Hospital in Shebin El Koum entered a strike after the end of the contract period and refusal to renew them with a100 pounds per person increase compared to last year.

The workers of the headquarters of Bisco Misr in Amieria entered a strike after the Board of Directors decision not to pay the profits. Their colleagues in the company’s branch in Soyouf area in Alexandria entered a parallel strike in solidarity with them.

Azza Mustafa Ibrahim, a staff member of the North Giza Educational Administration, entered a hunger strike because of the intransigence against her by the administration.

Hanan Ibrahim al-Sheikh, a kindergarten teacher in Gharbia, was on hunger strike because of the decision to exclude her from work based on accusations and charges from the school administration without investigating her.

The number of sit-ins is similar to that of hunger strikes, and this month there were two sit-ins.

Hundreds of workers of Bisco Misr Company in Alexandria organized a sit-in to protest against what they called the administration’s refusal to pay their dues from the annual profits.

The Egyptian Doctors Syndicate Council decided to start a sit-in at the General Syndicate, Sharqia Doctors Syndicate and all the subsidiary branches in solidarity with Dr. Mohamed Hassan. The crisis began on March 20th when the prosecutor asked for transfer to the 10th of Ramadan Hospital to collect data related to a certain case, and the doctor delayed in responding to that request, and he finally headed to the prosecutor, the latter had already left. When the doctor went to the prosecutor’s office, he was dismissed without taking his statements, and then he was surprised to find an official warrant for him. A decision was issued to imprison him for 4 days pending investigation, on charges of disrupting the work of the prosecution, disrespectful behavior. A trial was scheduled for May 2nd 2018.

April witnessed a request for a briefing by 8 MPs from the parliamentary bloc (25-30) to the Minister of Manpower regarding the Bisco Misr crisis.

April witnessed one vigil organized by service workers and security supervisors and employees of Ismailia General Hospital, in front of the building of the General Secretariat, after the decision of the services company to terminate their contracts, although they have been working for the company for two years.

The program monitored 34 social protests during April, distributed as follows: 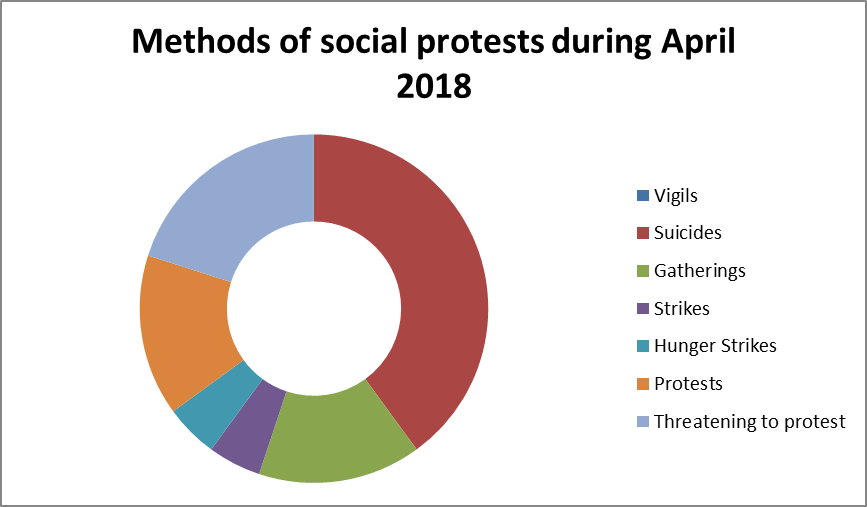 April witnessed 14 vigils including one organized by the young men of the Coday village in Ashmoun, against the widespread of addictive substances among the village young people.

Several habitants of Ezbet Sayadeen in Garbi, Damietta, have organized a vigil to demand legalizing affairs concerning their houses.

Furniture manufacturers in Damietta gathered in front of the Chamber of Commerce headquarters in a protest against the rise in prices of raw materials.

Dozens of Hurghada fishermen organized a vigil in front of the fish ring, protesting the decision to ban fishing in the Red Sea.

Dozens of Abu Qurqas center youth organized a vigil in protest against abusing and stealing state land and exploiting it for personal purposes.

A number of fish farm owners also organized a vigil against the decision to remove the houses constructed inside the Manzala Lake.

The residents of the North Qena village also organized a vigil to demand an end to the public auction on a piece of land for irrigation and to use it for serving projects for the village.

Residents and unit owners of the Porto Marina project also organized a vigil because of the deterioration of services, and the poor overall level of the project and the beaches.

Dozens of citizens in the Minya center organized a vigil against the contamination of drinking water in the village.

The drivers of the Mataria-Port Said road in Daqahlia staged a vigil against preventing them from entering Port Said.

Dozens of white taxi drivers staged a vigil to denounce the failure to enforce the ban on private cars through electronic applications.

Workers and employees of Zamalek club organized a vigil against the imprisonment of the club staff at the background of a report from the committee formed by the Minister of Youth and Sports to handle the finances of the club.

A number of members of the Tagammu Party organized a silent vigil in front of the party headquarters at Talaat Harb st., in solidarity with the major return marches in Palestine.

April witnessed 8 suicide cases; (A.M.H.) committed suicide in his residence in the Iron and Steel Zone, Dekheila Police Station, after going through a financial crisis.

Huda A. ended her life in Boulaq El Dakrour after a dispute with her husband over the expenses.

E.E. in Gonhouria district, Muharram Bek, threw himself out of the top of the Stanley Bridge for financial hardship, before the security forces could rescue him.

Ragab R.A. hanged himself at his home in a village in Fayoum governorate, where he lost all his money and after failing to travel to Italy again.

Young man “Amir W. in Helwan” committed suicide after losing all his money in the last printing house he owned and staying unemployed for a long period of time.

A worker from the Marg area also committed suicide to escape his struggle to pay his debt and fear of imprisonment because of his security receipts.

A.G.M. took a pill that is used to save the grains, which lead to his poisoning and then death, for passing through a financial crisis.

Driver A.S. committed suicide in the Iraqia village in Menoufia, for going through a financial crisis.

April witnessed 4 cases of threats of protest, where lawyer Ramadan Al-Arabi threatened to enter an open sit-in at the Helwan Bar Association, demanding an investigation into his unlawful detention in the Al-Maa’ssara police station while defending his client Salem Suleiman.

The Association of Journalists who are Zamalek members threatened to organize a protest against the decision of Zamalek chairman to freeze the excluded membership.

A number of lawyers affected by the conditions of registration in the syndicate threatened to organize a protest until their memberships were renewed.

MP Ahmed Farouk also announced in his the public session on April 16th his intention to sit in the House of Representatives and entering a hunger strike because of the lack of resolution of sewage problems in his district.

In April, 3 people gathered in the area of ​​the 10th Houd in Montaza to protest the hanging of Shaaban Hassan Jumaa in the police car while he was in detention.

The students of the Faculty of Pharmacy, Sadat City University, stopped the motorcade of the Minister of Higher Education during his participation in the university celebration, demanding the provision of a means of transportation for them.

The security services of Giza Security Directorate arrested 21 people from Zamalek fans after the association was invited to stand in front of the club in order to demand the resignation of Mortada Mansour, and on April 21st, the General Prosecution of North Giza decided to release them with the guarantee of their residence.

April witnessed 3 protests. A number of residents of various slum areas who were settled in Al-Asmarat organized a protest against the payment of LE 300 per month for the rental of the residential unit.

Parents, teachers and students from Sunrise schools protested at the Bajoor Educational Administration on Monday April 30th to support Sobhi Hisham Hassan the teacher at the school against the decision to terminate his employment contract without investigation after he was accused of flogging a student.

On April 19th, dozens of fish farm owners protested in front of the Fisheries Authority building in the Shata village, at Damietta entrance, protesting the decision to remove fish farms inside Manzala Lake.

April witnessed 1 strike in which the drivers of more than 13 villages and towns in the centers of Abu Tig, Sadafa and Assiut, on Tuesday morning April 3rd, protested the failure of the Roads and Bridges Authority in Assiut to implement the process of maintaining and renewing the road which harms their vehicles.

April witnessed 1 hunger strike when the family of Mohammed Abdalwab, of 7 women, entered a hunger on Wednesday April 4th in the central hospital of Deshna to protest the delay of investigations into the killing of Mohammed Abdel Tawab, after police had opened fire on him two months before, according to those women. 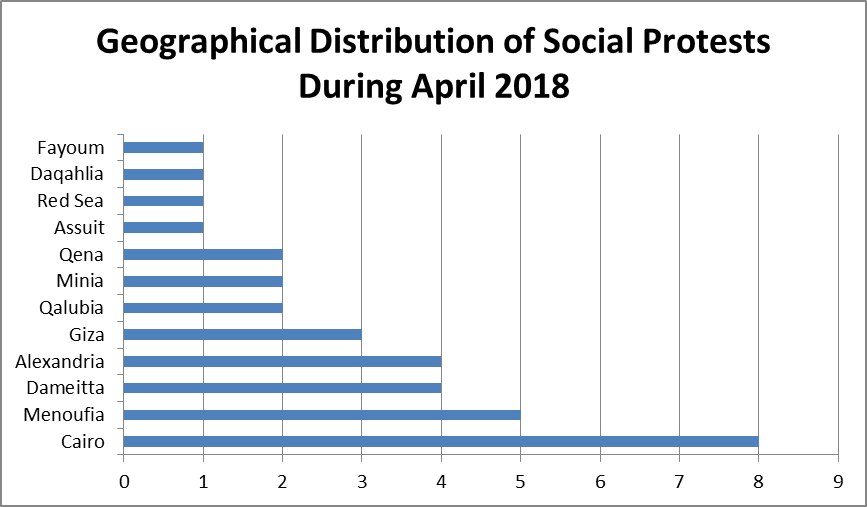 Cairo came first in the labor and professional protests in April with 7 protests. Gharbia came second with 3 ones. Governorates of Alexandria, Fayoum, Menoufia, Qena, Ismailia, and Beheira came third with 1 protest each during April. 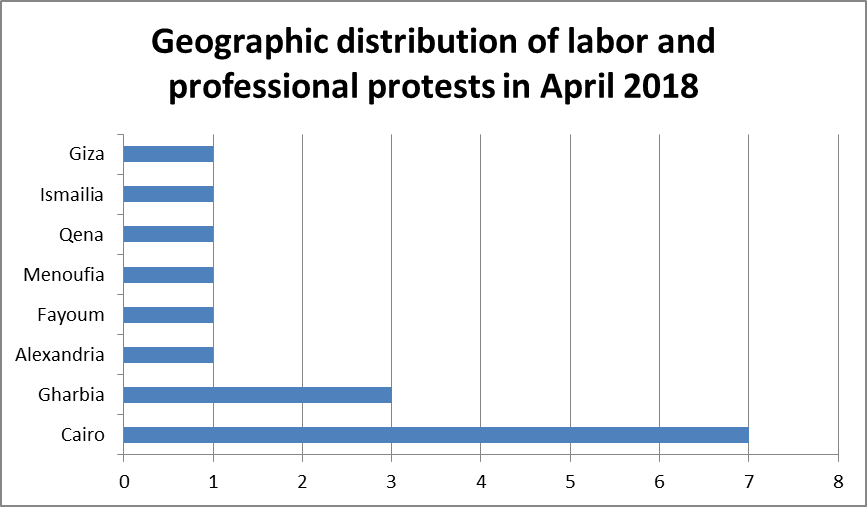 Cairo came first also in social protests with 8 ones during April, and Menoufia came second with 5 ones during the month.

As for the third place, it was for both Dameitta and Alexandria with 4 ones each.

Giza came third with 3 protests during the month.

And Qalubia, Qena and Minia came fifth with two each.

At sixth and last, Assuit, Red Sea, Daqahlia, and Fayoum came with one each. 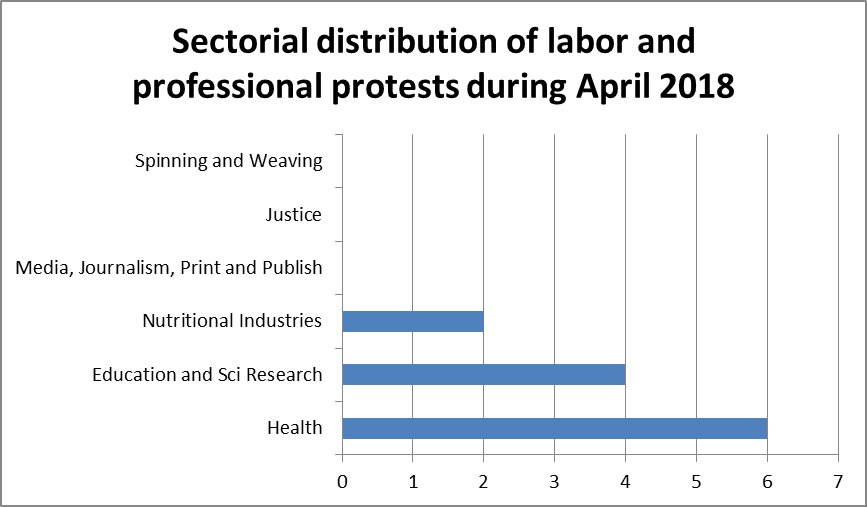 The health sector came first in terms of the number of protests during April with 6 protests.

Education and Scientific Research came second with 4 ones.

Media, Journalism, Print and Publish, Justice, and Weaving came fourth with one each. 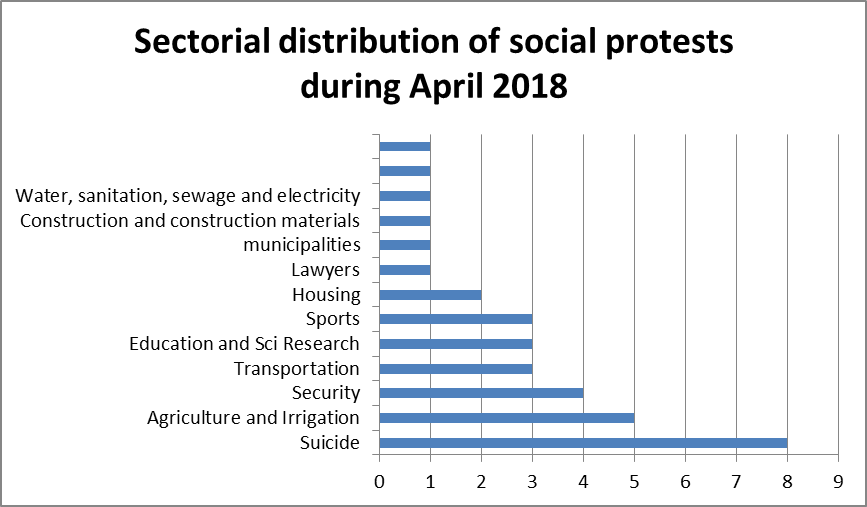 Suicide because of poor living conditions came first before all other forms of social protests during April with 8 cases.

And at the fourth place, Transportation, education, scientific research and sports came fourth with 3 each.

Thus, from the previous presentation:

Program of Freedom of expression of workers and social movements