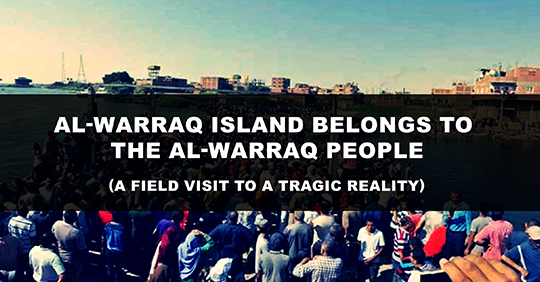 Tension, suspicion and anxiety have not ended since the beginning of our first steps to the ferry of Shubra al-Khaymah, which has brought us to Al-Warraq Island; That piece of paradise, which has become a place of conflict between people who came to it dozens and may be hundreds of years ago, settled and issued their government papers confirming their ownership, and the authority that has been trying to remove them.

It is one o’clock, and the call for Noon prayer could be heard from the mosque, mixed with the light of the sun that has spread over the island and dozens of surrounding islands. Things seem normal, but the closer you get, the more you know things are not normal at all.

Once you arrive at the river ferry that will take you to the island, especially if you are a stranger, you’ll know what I’m talking about.

A central security vehicle stands at the beginning of the road leading to Al-Moa’assassa ferry, which transfers people to and from the island, with officers and soldiers seem at first sight to be just hanging out, while in fact they are watching all that might happen suddenly from the people of the island in defense of their homes and land, where they grew up.

They are held away from any aspect of life for the island and its people.

We tried to wash our hands but the water was cut off, which confirmed their suffering from the continuous cutting of water on the island. People also expressed strong dissatisfaction with the spread of drug trafficking in public day and night without and security control, although there is a police point inside the island, especially after the clashes between the people and the police in June 2017 last year (We had already noticed that as we were leaving, we passed through the side streets of the island and we saw a woman selling narcotics during the day), which again raises the question of the real role of the police.

The origin of the story:

A report of the incident was issued, 22 people from Al Warraq were accused of protesting, and the case was referred to the Misdemeanor Court set for first hearing on July 30th 2018, and the case is still in Court.

In addition to the issuance of the Prime Minister’s Decision No. 20 of 2018, which includes the establishment of a new urban community on the territory of Al-Warraq Island, which means turning that island into a city like 6th of October, New Cairo, 10th of Ramadan, Badr, Shorouq and other urban cities, in preparation for the expropriation of the people of the island, which led the people of the island to appeal against the above-mentioned decision before the Court of the State Council.

However, the State has taken many measures to tighten the situation on the people of the island to force them to give up their homes, such as restricting the entrance of food, building materials, the deliberate cutting of drinking water, preventing them from the transfer and sale of agricultural crops, and the arrest of some of them putting them in many cases to force them to leave their homes.

Al Warraq Island is not the first island the state plans to turn into an investment project, as there is a plan to convert many islands such as the islands of Mohammed, Dahab and others.

All of the above proves the state’s policies toward the people of Al-Warraq Island by forcing them to evacuate the island constituting a violation of one of the most important human rights; the right to housing, as well as the attack on private property. As we are not only talking about violating ownership of some houses or yards to work on constructing a vital road, but about evicting people from hundreds or thousands of houses for the sake of an investment project. In different circumstances, citizens will resort to the state to protect them from the attempts of businessman or a greedy capitalist wanting their land, but here we talk about the state itself which plays this role!! Who to turn to?