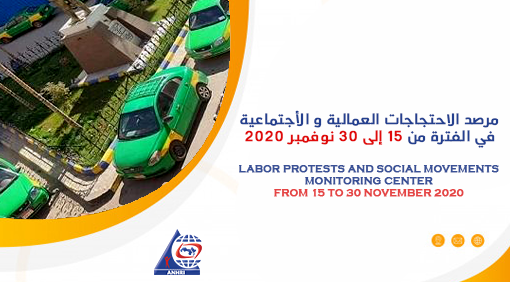 The second half of November 2020 witnessed 6 protests including one labor protest and five social protests.

Suicide cases represented half of the protests’ forms as the reporting period witnessed three suicide attempts as a result of the economic and social conditions, leading suicide became the most important means of social protests.

1- A young man committed suicide by hanging himself after passing through a financial distress in Sharqyia governorate.

2- Also, in Daqahalyia governorate, another man killed himself because he couldn’t afford the household expenses.

3- In Qalyubia governorate, a businessman committed suicide after passing through a financial disterssin Obour City.

The reporting period witnessed two strikes, one of them is labor and the other is social.

2- In Qalyubia Governorate, women at Qanater Prison went on strike because of the violent treatment they subjected to in addition to sending one of the prison’s inmates to a disciplinary cell.

The reporting period witnessed one gathering case in Minya governorate, at one of Mallawi’s villages named “Al-Barsha”, where a number of religious extremists gathered to confront the village’s Copts and consequently violence clashes erupted in the village. In response, the security forces interfered and imposed a state of emergency following such a protest which was on a religious basis, although religious rites is a right guaranteed to every citizen as stipulated in the Constitution.

‘Residential neighborhoods’ Sector topped the list of protesting sectors with 4 protests, followed by the sectors of “Women and transportation” with one protests each.

Each of ‘the health sector – private sector employees – business sector workers- railway drivers – the farmers and peasants’ sectors, with one protest number.

The geographical distribution of protesting governorates

The six aforementioned protests were distributed in the governorates of (Menoufia – Daqahlia – Sharqyia – Qalyubia – Minya) as follows:

In Qalyubia, there were two protests (strike- suicide)

In Menoufia, there was one protest (strike)

In Minya, there was one protest (gathering)

In Sharqyia, there was one protest (suicide)

In Daqahlia, there was one protest (suicide)