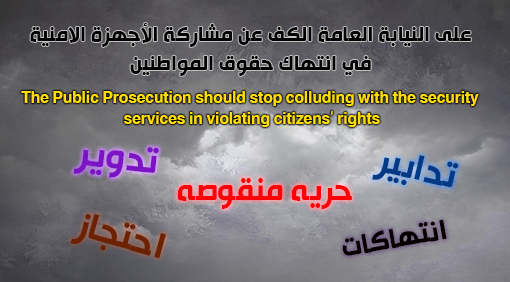 The Arabic Network for Human Rights Information (ANHRI) said today that the continued incarceration of citizens held in pretrial detention while refraining from implementing the release orders issued by courts, keeping them in unlawful detentions, constitutes a flagrant and deliberate violation of the Constitution and its legal provisions as well as the international conventions and treaties that were ratified by Egypt and are binding to all state authorities.

More than a week ago, the Criminal Court convened at the Police Cadets Institute in Tora ordered the release of more than 400 defendants accused in various cases replacing their remand detention with precautionary measures. This probationary release, despite serving to undermine the citizens’ full freedom, hasn’t yet been implemented. Rather, some of them have been “rotated” and interrogated into new fabricated cases and accordingly they were kept locked up for additional periods. This happens because the security services consider these innocent people opponent of the government’s policies, whereas most of them are, in fact, nothing but citizens who used their right to freedom of expression and voiced their opinion and criticism without violating the law.

ANHRI said, “The National Security Services’ ongoing circumvention and blatant defiance of court orders to release those people, while rotating and including them into new cases over the same charges by the State Security Prosecution to keep them locked up in custody- instead of putting an end to such violations and implementing the rule of law- refute all the state’s statements about the independence of the judiciary and the Prosecution (as part of the judicial system), which, in turn, lead citizens lose faith and confidence in their government and the entire judicial system.”

ANHRI added, “We cannot turn a blind eye to all the violations committed by the security services against citizens with the tacit consent of the Public Prosecution, which lawmakers in Egypt assigned, in accordance with the law, to oversight the implementation and the non-circumvention of court decisions. We always affirm that it is our duty to expose and shed light on such violations, and we hope that the prosecution will resume its role in consolidating the protection of the law and preserving public rights, freedoms and duties. “

ANHRI calls on the Public Prosecutor to swiftly address Egypt’s different prosecution offices in general and the State Security Prosecution in particular to highlight the urgent need to stop depending on the security services’ investigations, which most of them deem unsubstantiated as they merely express the opinion of those who conduct them, as stated by the Court of Cassation. We also call for the need to emphasize the oversight regarding the implementation of release orders issued by courts with their different kinds, so as to guarantee that they won’t be rotated once again into new fabricated and trumped-up cases or kept locked up in unlawful detention awaiting the signal or approval of the so-called National Security apparatus, upon which many of those ordered to be released are held hostage for long periods before they are released or rotated in new cases.