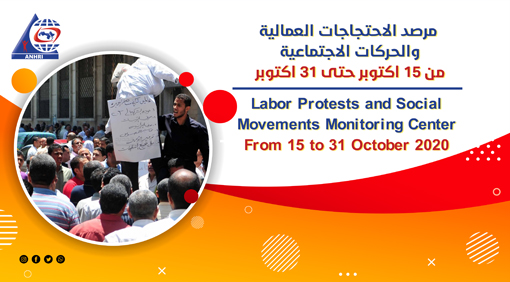 The Labor Protests and Social Movements Monitoring Center monitored 11 protests, including 9 social protests in addition to 2 labor protests during the second half of October 2020.

The reporting period witnessed an upsurge in social protests in more than one governorate after the new academic year kicked off at all educational stages, making the suffering of citizens getting worse in light of the precautionary measures that will be carried out over second wave of the coronavirus. For example, a group of 300 students went on strike on first days of school at “Manshiet Al-Yaqoubia” in Al-Gharbia governorate to protest the school’s non-completion of its maintenance procedures.

“Gathering” cases topped the list of labor protests took place during the reporting period, followed by “strike” cases then by “suicide” cases in third place.

‘Residential neighborhoods’ Sector topped the list of protesting sectors with 6 protests, followed by the ‘education and scientific research’ sector sectors with 2 protests each, then came the ‘spinning and weaving sector – state workers sector – foreign community sector) with one protest per each .

Cairo came at the forefront of the list of the protesting governorates with 4 protests, which is the highest among all governorates, followed by Qena governorate with two protests.

In third place, each of (Qalyubia – Gharbia – Fayoum – Luxor – Giza) governorates shares a protest for each.