A Year After the 20th September 2019 Incidents (Documentary) 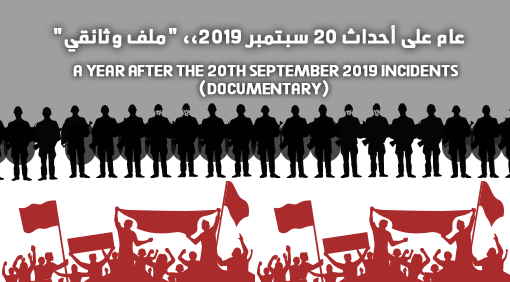 On September 20, 2019, Egypt witnessed a wide social movement, whether on the Egyptian street or on social media, resulting in wide wave of random arrests of large numbers of citizens of all categories and ages. The movement has not been witnessed by the Egyptian state for nearly six years, specifically after the events of 30 June 2013. The move provoked panic and hysteria within the Egyptian state institutions, which led the security services to prepare their guards and troops and arrest thousands of citizens, including some supporters of the regime itself in a situation that brings back to mind what happened in the 1977 “bread uprising”, after which the Egyptian regime arrested those who participated in it, and who did not participate, including its supporters at that time.

What caused the September 2019 movement, what did this movement lead to, and what happened?

Questions we are trying to answer in this paper.

First: – reasons for the September 20, 2019 demonstrations. “Social, political and economic conditions, and the emergence of Mohammed Ali.”

allocated hot numbers to receive these reports throughout the day.

Third: Statements by the Public Prosecutor concerning the incidents and the seriousness of their application on the ground.

Fourth: The role of civil society institutions and their lawyers during these events

Constitution, the Criminal Procedure Code and the Law of Attorney.