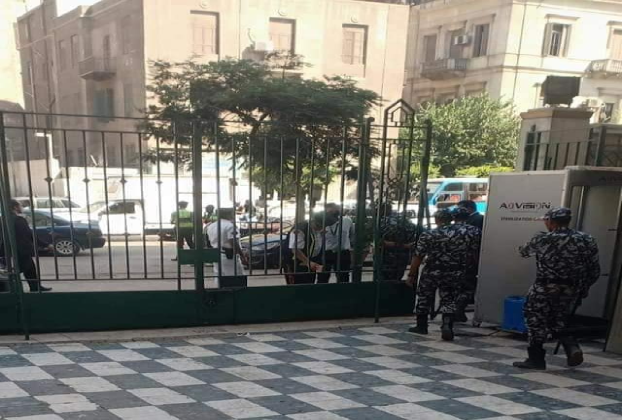 Midterm elections for the Engineers General Syndicate under tight security

The reporting period witnessed 3 protests which came at the forefront of the protesting method, followed by “petitions/ complaints and sit-ins” with two cases each, in addition to one strike and one suicide case due to the poor living conditions.

The most important protests took place during this period:

– On 4 July 2020, a group of employees at Nile Waterproofing Materials Company in Alexandria’s Al Max entered an open sit-in in protest against the administration’s negligence to negotiate over the demands raised by protesters who demanded the disbursement of their share of the company’s profits and the inclusion of new workers into the health care system.

– On 8 July, a number of workers at Sasco Stationery Group at the 10th Of Ramadan city entered an open sit-in on a rotational basis to protest against the closure of the factory and the non-disbursement of their financial dues while demanding them to submit their resignation.

– On 9 July, a group of employees at the 6th of October Association in Alexandria’s Al-Ajmi staged a protest in front of the headquarters of the Cooperative Authority in Nasr City in Cairo protesting the non-payment of their salaries for consecutive 6 months and calling on the Housing Minister to resolve the matter and order the payment of their salaries.

– On 14 July, employees at “Tayba Bak” Cardboard boxes (carton) factory entered a labor strike calling for the disbursement of their late wages.

– On 15 July, a group of pensioners at Telecom Egypt (TE) sent a memorandum of signature of 1,000 pensioners to the President of the Republic, the Prime Minister, and the Minister of Social Solidarity complaining about the Insurance Authority’s response stating that they don’t deserve the “five bonuses”.

On 13 July, amid unprecedented security tension, the Midterm elections at the Engineers Syndicate were held resulted in Ahmed Othman becoming the chairman of the syndicate by a majority of votes. Mohamed Abdel-Azim has been also elected as the Syndicate representative, Mahmoud Maghawry as the Secretary-General, Zainab Afifi as the Assistant Secretary-General, Muhammad Nasser Hussein, Treasurer as the Syndicate’s Muhammad Nasser Hussein, Treasurer, and Ahmed Hashish, as the Syndicate’s Assistant Treasure.

On the other hand, the Official Gazette published- in its issue released on Sunday, July 5- the decision issue by the Ministry of Tourism and Antiquities No. 366 of 2020, to nullity the Tour Guides General Union’s announcement of the results of the elections took place on April 25, 2019.