Prisoners of conscience in Egypt: No release, no trial, no visits ANHRI reiterates its call on the Public Prosecutor and the Interior Minister to halt victimization and harassment of prisoners and respect the rule of law 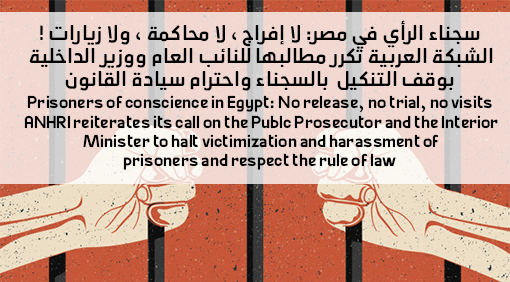 The Arabic Network for Human Rights Information (ANHRI) said today that the Public Prosecutor, the Minister of the Interior, and the Assistant Minister of the Interior of the Prison Authority should reopen visits to the families of prisoners and detainees in all Egyptian prisons, after they were deprived of visits for the past four months due to the outbreak of the coronavirus disease (COVID-19). This demand came in conjunction with the Egyptian government’s coexistence plan with pandemic and its move to gradually open up the country and lift the curfew, while it excludes prisoners from the plan.

ANHRI asserts “The suffering the families of detainees have endured by being completely deprived of visiting their relatives in prison, in addition to the manifold complaints we have received during the past three months demanding to be reassured of detainees’ health condition, constitute distress calls that must be taken into account by the authorities”.

It is worth mentioning that most of detainees and defendants were also deprived of their right to appear before their judge or the competent prosecutions (except for defendants in cases other than opinion-related ones or that of a political nature). The detention renewal sessions have been made just one paper without bringing defendants from their jail to the courthouse, in violation of the Criminal Procedure Code and the Egyptian Constitution. Furthermore, the concerns of the families of detainees and prisoners are alarmingly increasing, in light of the absence of transparency and the lack of information about their relatives’ heath conditions in prison amid the spread of the coronavirus pandemic, not to mention the families’ inability to be communicated with their detained relatives or to receive any letters from them from inside the prison.

Such fears and concerns have deepened as the authorities refused to respond to the several distress calls received from the families of many prisoners and detainees demanding to allow the entry of medicine to prisons. Consequently, many lawyers have filed lawsuits before the Court of Administrative Justice demanding to allow prisoners of conscience to receive the medical items, including alcoholic antiseptics, surgical masks, gloves, and personal hygiene tools brought by their families to protect them against the coronavirus.

ANHRI added that in accordance with of Article 38 of the Prison Regulation Law No. 396 of 1956 and its (Internal) Regulations/bylaws, along with its amendment by Presidential Decree No. 106 of 2015, those held in pretrial detention have the right to correspond or telephone their family for a fee, and to be visited by their family twice a month, under the supervision of the prison’s authorities and in accordance to the procedures determined by the internal regulations. However, the authorities don’t implement the law and regulations, and the latest example is the series of violations the detained activist Alaa Abd-El Fattah’s family has faced; from the intransigence, physical assault and abduction they have endured to the arrest of his sister Sanaa Seif in front of the Public Prosecutor’s Office at Rehab City and her detention just because her mother demanded to check on his son by a written letter!

ANHRI also expresses its deep concern at the Public Prosecutor’s inaction and disregard towards the complaints submitted to him, which call on him to implement the law and to order the release of detainees who have exceeded the two-year legal limit prescribed by law for remand detention, such as prisoner of conscience Mohamed Adel- check the statement https://www.anhri.info/?p=17292&lang=en- This is in addition to the intransigence, harassment and violations committed against prisoner of conscience while having their detention renewal considered in their absence and without providing a legal defense, for the alleged inablility to transfer them under security pretext.

ANHRI reiterates its demand to release all prisoners of conscience in the overcrowded prisons, or at least to allow them to receive family visits. It also calls for replacing their detention with any of the precautionary measures prescribed by law in Article 201 of the Criminal Procedure Code, for fear of their lives and to limit the spread of the Coronavirus pandemic in light of the absence of protective tools in prison.