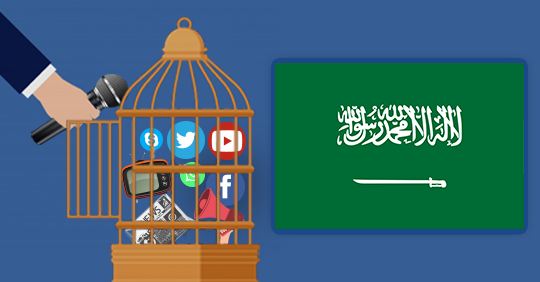 Everything can be negotiable in Saudi Arabia except to undermine the royal family’s power. They can repudiate extremism, discrimination, and human rights violations took place in the past and imputed all such transgressions to the Muslim Brotherhood group. They can allow women to get behind the wheels of their cars; they can even allow them to walk in the street with tight clothes and appear in public without hijab (veil), they can also allow women to be appointed to government positions. They can launch an entertainment sector, open cinemas and nightclubs, organize sing and dance- parties and invite singers from all over the world. They can do all these things to improve the Kingdom’s image in the West and to alleviate the pressure placed by calls for fundamental political reform which rests on the core values of human rights. But, in spite of such cosmetic reforms in public freedoms record, the violations of human rights and most specifically those against freedom of opinion and expression remain the same and have worsened indeed.

In other words, whoever criticizes or rejects the government’s measures or proposes a genuine reform vision in the Kingdom is subjected to either murder or long term imprisonment following a trial that lacks due process, or to enforced disappearance for long periods without being brought to trial, at the same time the authorities harness media outlets and platforms to pray for the King and the Crown Prince.

The Public Decency Code, approved by the Council of Ministers upon Resolution No. 444 issued on 9 April 2019, has entered into force as of Saturday 28 September, after the Minister of Interior issued the regulations for its implementation. The Resolution, which consists of 10 articles, lists the public behavior violations which include: appearing in a public place in “indecent” clothing or wearing clothing with language, images or symbols that may offend public decency.

Other violations may include: writing or drawing on public transportation vehicles or public walls, or any of public place’s components or assets, or any other means of transportation, unless authorized by the concerned authority, in addition to committing any acts that may harm, intimidate or endanger the public places’ visitors or passerbys.

On 28 May, Saudi Arabia’s Council of Ministers issued a new regulation on the “use of information and communication technology in government agencies” upon Resolution No. 555 issued on 27 May 2019.

The most prominent cases that had a major impact on freedom of expression in KSA are: the assassination of Saudi journalist Jamal Khashoggi inside his country’s consulate in Istanbul on 2 October 2018, the trial of Loujain al-Hathloul and a number of human rights defenders, and the trial of cleric Salman al-Awdah along with other opponents of the Kingdom’s decisions pertaining to the boycott of Qatar.

Fourth: Violations of freedom of expression

You can barely find any TV program or newspaper that deviates from its prescribed role, which is to pay tribute to the achievements made by the crown prince, and in case any media outlet that does so or crosses its red line, the authorities rush to suspend it without an explanation or further ado. An example of this would be: the sudden suspension of “Maa Daoud” (with Daoud) TV show, aired on SBC channel and presented by Saudi media professional Daoud Al Sheryan, President of the Radio and Television Authority. The ban came after the TV host discussed, throughout 6 episodes of his controversial program, a number of social issues including; teenage girls running away from home, foreign women who marry Saudis (and vice versa) and the issue of slums in the country.

In addition to the Saudi authorities taking control of media outlets, they seek to further suppress freedom of expression by restricting social media through mobile applications.

The government’s position appears blurred and hesitant regarding the applications using the Voice over Internet Protocol (VoIP) call services. For example, it blocked the VoIP services in WhatsApp for the second time after it suddenly worked in the morning of March 12 and lasted for a couple of hours before it stopped against.

It’s worth mentioning that free (VoIP) call services were blocked in applications such as WhatsApp, Viber and others in 2016 without clear reasons. However, on 13 September 2017, the Saudi Minister of Communications and Information Technology Abdullah bin Amer al-Sawahha announced lifting the ban on all VoIP apps. He stressed at the time that the Communications and Information Technology Commission (CITC) would oversee reviewing that all VoIP apps comply with the regulatory requirements and that it would work with telecommunications companies to enable lifting the ban in accordance with regulations.

On the other hand, the Saudi Ministry of Information began on July 29 to block websites, electronic forums and social media accounts bearing the names of tribes, cities or public places, in implementation of Article 16 (Paragraph III) of the electronic publishing law.

Prolonged detention and imprisonment without trial, exacerbated by the extremely poor prison conditions, is one of the Saudi authorities’ means to suppress dissent, silence voices, and restrict freedom of expression. Besides prisoners of conscience who have been detained in Saudi prisons since 2017, security forces have added other prisoners including Saudi citizens and Arab expatriates residing in Saudi Arabia.

For example, on 22 February 2019, the Saudi State Security Service arrested Jordanian journalist Abd al-Rahman Farhana at a checkpoint near Dammam airport, while he was on his way to Jeddah. He was then taken to his home which was searched by police officers before confiscating the journalist’s mobile phone and personal computer, and thereafter the security personnel took him to an unknown destination without announcing the reason for his arrest.

On 4 April 2019, the State Security Service arrested, without giving any reasons, Palestinian doctor Muhammad Salih al-Khudari (Abu Hani), who is in charge of managing relations between Hamas and the Kingdom for two decades and has been in Jeddah for nearly three decades.

With regard to the General Authority for Entertainment headed by Turki al-Sheikh, the Saudi authorities arrested, on September 10, Omar al-Mukbel, a professor at the Faculty of Sharia (Islamic Law) at the University of Qassim; for criticizing the practices of the Entertainment Sector in the Kingdom.

Also, on October 21, the authorities arrested poet Hamoud bin Qasi al-Subaie along with video designer Consul bin Subaie, against the backdrop of a video criticizing Turki al-Sheikh and the Entertainment Sector’s policy.

The 13th of March 2019 marked the first trial session of nine Saudi women’s rights defenders before the Specialized Criminal Court in Riyadh, in which journalists and diplomats were prevented from attending the hearing.

Activists Loujain al-Hathloul, academic Aziza Yousef, blogger Eman al-Nafjan, Hatoon al-Fassi, Shahdan Al-Anzi, Miya Al-Zahrani, Abeer Namankani, and Nouf Abdel-Aziz appeared before the court, over charges related to their work with the United Nations and others include contact with international human rights defenders. All the aforementioned activists were not allowed to communicate with a lawyer or even to defend themselves. Days later, on 28 March, only Aziza Yousef and Eman al-Nafjan were temporarily released.

On the trial’s day, 13 March, Loujain al-Hathloul’s family reported that the authorities offered to release her in return for her silence over alleged torture she suffered in custody, as they asked her to appear on a video to deny the torture she was subjected to, but she rejected the offer.

It is worth noting that the above mentioned women human rights defenders were arrested as of May 2018.

The trial of cleric Salman al-Awdah also continued this year and his case was adjourned for several times, until it was set for adjudication at the hearing of 10 October, but the court decided to extend the sentencing hearing to 30 October 2019. Al-Awdah’s trial first began in September 2018, a year after his arrest. The Public Prosecution called for issuing a death sentence against him as a discretionary penalty, over several charges including: “Corrupting the land by repeatedly endeavoring to shake the structure of the nation and bring about civil strife; inflaming society against the rulers and stirring up unrest; and connection to characters and organizations and holding meetings and conferences inside and outside the kingdom to enact the agenda of a terrorist organization against the nation and its rulers” (1) ; against the backdrop of some comments he posted on “Twitter” in September 2017 about the diplomatic crisis between Saudi Arabia and Qatar.

The arrest of al-Awdah came as part of a crackdown launched by the Saudi authorities targeting 20 citizens including writers and journalists critical of the Kingdom’s boycott of Qatar.

The case of Jamal Khashoggi’s assassination inside his country’s consulate in Istanbul on the 2nd of October 2018 still tends to overshadow the current scene in the Kingdom. The authorities began to hold a sham trial to avoid accusations that the state of Saudi Arabia is responsible for this terrible crime. In a trial that was shrouded in secrecy and whose first session began on Thursday, 3 January 2019, the criminal court in Riyadh convicted 11 defendants of complicity to the murder of Mr. Khashoggi, but their identities were not revealed by Saudi officials. The Public Prosecution sought death sentence for five of the 11 unidentified defendants for their direct involvement in the murder.

On 19 June, the UN Special Rapporteur on extrajudicial, summary or arbitrary killings announced in a report that “Saudi journalist Jamal Khashoggi was the victim of a premeditated extrajudicial execution, for which the State of Saudi Arabia is responsible”.(2)

Fifth: Most common accusations against freedom of expression

The following are the most common accusations used in Saudi Arabia by the authorities to restrict freedom of expression: “suspicious contact with foreign parties”, “calling for regime change in the Kingdom”, “promoting footage supporting the uprisings in the Arab countries”, “producing something that harms public order, religious values, and public morals”.

6- The “Mostaqbal” Prison in Ismailia