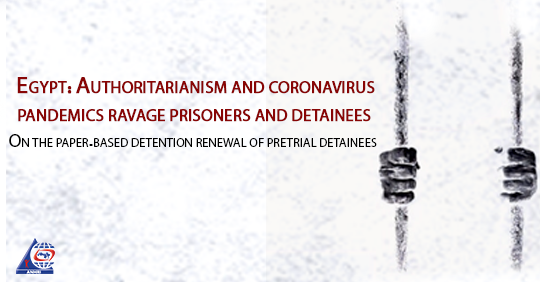 In his decision issued on 24 March 2020, Prime Minister Mostafa Madbouly didn’t refer to the suspension of courts and prosecutors’ proceedings. But Justice Minister Omar Marwan and some courts’ chiefs preceded the decision by suspending all court trials and sessions and adjourning all cases in the absence of defendants starting from 16 March 2020, as a precautionary measure for any possible repercussions of the emerging coronavirus.

Earlier last month, the Interior Ministry decided to suspend prison visits nationwide for 10 days as of Tuesday, 10 March for public and inmates’ safety.

It’s a detention renewal, but without the presence of neither defendants nor their lawyers and without providing any legal defense.

So the situation becomes as follows:

So, can this be legally permissible?

“Pretrial detention is a measure that constitutes a severe violation of personal freedoms. It has a tainted past for being misused in many countries especially in the authoritarian regimes where the government’s rights predominate the individuals’ ones. Based on this measure, defendants can be held in prison during the whole investigation period- or part of it- and their human dignity, which they enjoy while they are free, can be violated, which makes it necessary to scrutinize the degree of proportionality between the pain of remand detention and the interest of society.”(1)

Since pretrial detention constitutes an abhorrent practice that contradicts the principle of the presumption of innocence “The accused person is presumed innocent until proven guilty”, international and domestic legislation is keen on restricting it by establishing a set of rules, conditions, justifications and time limit to specify its duration, otherwise it would be void, thereby necessitating the release of detainees.

After the coronavirus outbreak has been labeled a global pandemic by the World Health Organization (WHO), we find the Interior Ministry repeatedly announcing that pretrial detainees couldn’t be transferred, for security reasons, from their jail to the place where their detention is set to be considered. This announcement is always followed by a notification message by the authority in charge of considering the defendant’s detention renewal stating either of the following: that the detention has been renewed on paper, or that the consideration of the case has been adjourned for a specific period. And after the end of this period, the Interior announces, once again, the inability to transfer the defendant under security pretext, which is the force majeure clause.

What are the circumstances or the force majeure event that prevent state institutions from carrying out their work?

To sum it up, force majeure events include both acts of nature such as earthquakes, floods, hurricanes, epidemics, and outbreaks of infectious disease, and human-caused acts such as wars and uprisings.

Law enforcement and criminal justice agencies in Egypt (the Ministry of Justice, Public Prosecution, and the Ministry of Interior) have used the coronavirus pandemic, which counts as a force majeure event, to further crackdown on prisoners and those held in remand detention especially prisoners of conscience; by depriving them from their right to visitation and from presenting their pleadings during their trials and detention renewal sessions, instead of carrying out another available procedure; to free them or to release then with precautionary measures.

In the same context, prominent lawyer and former presidential candidate Khaled Ali said: “It is not permissible to use the coronavirus pandemic as a pretext or an excuse to deprive pretrial detainees from their right to receive family visits/ calls or to communicate with their lawyers, or even to meet their judges, when they are prevented from attending their detention renewal sessions for periods that exceeded the maximum limit for remand detention”.

In case the law provides for extending remand detention for every 45 days, exceeding this period without bringing defendants from their jail to appear before the court makes us argue that the detention order should be considered invalid. Accordingly, the court shall not postpone its consideration of the detention renewal; because with this delay it will be ordering the continuation of the defendant’s remand detention, which means that he will be detained for a period exceeding 45 days, without having attended his detention session or allowing his lawyer to present his legal defense. (2)

Arbitrariness is not something new

It has been years since the Ministry of Interior created a new approach to crack down on prisoners of conscience held in pretrial detention, as it deliberately used to refrain from bringing detainees from their jail to attend their detention renewal session under the pretext of “security reasons”, despite the absence of any force majeure event or any emergency circumstances that could impede their attendance. This can also occur despite the fact that many of the detention renewal sessions took place in the Police Cadets Institute which is located within Tora Prison area where many of remand detainees are being held, meaning that detainees are only a few meters far away from the place of their renewal sessions.

Why not release them then?

Because pretrial detention is an abhorrent measure, we find that legislators put a set of important and precise rules and conditions in order to minimize its use as tight as possible. Article 134 of the Criminal Procedure Law allows for pretrial detention when it is necessary specifying certain circumstances and reasons for a prosecutor to request that a detainee be held on remand. These circumstances are:

(D) When it is necessary to prevent grossly compromising security and public order as a result of the magnitude of the crime.

(E) If the accused does not have a known address or place of residence in Egypt and the crime is either a misdemeanor or a felony that is punishable with imprisonment.

– Finally, if the crime is a felony or misdemeanor that is punishable with imprisonment for a period no less than a year, and if the evidence is sufficient (after questioning the accused), he shall be ordered to be held in pretrial detention.

Many of those held in pretrial detention, particularly prisoners of conscience, don’t meet the aforementioned conditions, but nevertheless, their detention continues to be renewed.

Although there is a way out of such severe breach of law (the ongoing detention of those people), which is represented in ordering a probationary release for detainees, imposing a police and arbitrary approach in carrying out such measurses is always predominant.

Legislators approved a set of precautionary measures that can be issued by the Public Prosecution or the investigating judge and serve as an alternative to pretrial detention. According to the Criminal Procedure Code, these measures carry the same rules and restrictions prescribed for preventive detention in terms of the duration and the possibility of extension. These rules include:

(C) Prohibiting the accused person from going to certain places

In this regard, human rights lawyer Khaled Ali said: “Under Article 201 of the Criminal Procedure Code, authorities are empowered to consider probationary measures instead of detention, and this measure may be to prevent the accused from traveling or to prevent him from leaving the city in which he lives … etc”.

Legislators adopted such an article to help the authorities strike a balance between the rights and freedoms of the accused and the rights of society.

The presumption of innocence prescribed in the Constitution requires that it should be accompanying the accused during all the stages of criminal prosecution, starting from the stage of investigation till handing the ruling where the accused is convicted of committing a crime. Therefore, arbitrariness in the use of pretrial detention and lack of respect of the requirements of criminal litigation in a way that wastes defendants’ rights and freedoms guaranteed by the Constitution will turn pretrial detention from one of the investigation proceedings into a tool of punishment. (3)

The coronavirus pandemic has turned into an additional tool for a further crackdown on detainees in general and prisoners of conscience in particular.

Instead of releasing prisoners and pretrial detainees as one of the aspects to counter the effects of such pandemic, coronavirus has become a further burden intensifying the pre-existing arbitrary and poor prison conditions, including the denial of visitation among the other rights prescribed by the constitution and the law, even if it is carried out as part of the preventive measures adopted with the knowledge of the Ministry of Health or the Medical Syndicate.

Furthermore, the state and its various law enforcement agencies have expanded their practices of arbitrariness by issuing the detention renewal orders just on paper without bringing defendants from their jail to appear before the investigating authorities and without allowing them to defend themselves, under the pretext of the force majeure clause, instead of releasing them since they shouldn’t be detained from the first place. Such a matter consolidates the authorities’ method of using pretrial detention as a tool of punishment even in the tremendously difficult circumstances the country is witnessing amid the outbreak of the coronavirus pandemic.

* The Ministry of Interior:

– It must stop wasting the rights of defendants under the pretext of “security reasons”, especially that these reasons constitute a flagrant violation of the law and defendants’ rights.

– Allowing prison visits, on an equal footing with many governmental institutions and departments, while carrying out all the preventive measures adopted by either the Ministry of Health or the Medical Syndicate.

– To implement the rule of “The accused person is presumed innocent until proven guilty” and release all those held in pretrial detention, especially those who are detained over opinion-related cases and non serious crimes.

– To expand its replacement of pretrial detention orders with precautionary measures stipulated in the Criminal Procedure Code, especially in opinion-related cases and non serious crimes.

– To exercise its role in punishing whoever violates the court order of bringing the accused to consider his detention renewal within the prescribed time-limits and to refrain from issuing detention renewal orders on paper since it arbitrarily violates the law and the defendants’ rights along with fair trial guarantees.

– The judicial authority shouldn’t adjourn any detention renewal session beyond the legally prescribed time limit, and in case of exceeding the detention’s maximum period, the court is required to order the defendant’s release.