Iraq: Corruption did not spare the Internet 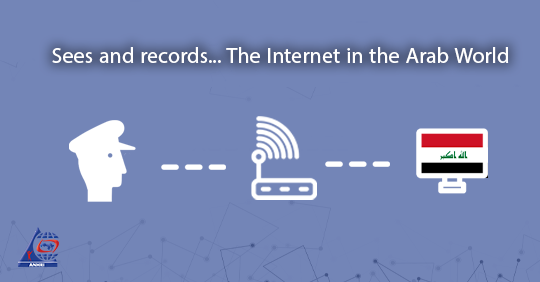 Telecommunications and Internet service in Iraq suffer from severe weakness and increase in prices due to several factors, including the destruction of parts of the network infrastructure by armed groups, weakness of the service companies, conflicts between owners of towers who provide citizens with the service, and the manipulation of some active companies in smuggling the Internet capacities and the introduction of smuggled capacities. The government is weakened by corruption, a sectarian division of power, and narrow partisan interests. Internet speed is considered the biggest challenge for investors in Iraq and Iraqi companies, banks and mass media lose millions of dollars as a result of weak and frequently cut Internet connection due to wrong governmental decisions.

Iraq suffers from political disorders since the US invasion in 2003, which is reflected in the weakness of the telecommunication sector’s legal and physical infrastructure. The unrest also reflected in the government’s policy toward users and Internet service providers. Communication services did not fulfill the ambitions of Iraqis, and Internet use in Iraq remains modest.

The amended Iraqi Penal Code No. 111 of 1969 applies to Internet users. The law contains many criminal defamation articles in which the penalty in publishing cases reaches the death penalty, life or temporary imprisonment, or confiscation of movable and immovable property and other penalties.

Since 2011, successive Iraqi governments have been trying to pass a law that can be used to control freedom of expression allowed by the use of the Internet and social media websites that have encouraged users to express their views. In 2011, the government introduced a draft law on “Cybercrime” to the parliament for discussion. But under pressure from civil society organizations, on February 6, 2013, the parliament had to return the draft law to the government to amend it.

On January 12, 2019, the House of Representatives began to discuss the “Cybercrime” law, which was submitted by the government for debate in Parliament. The Council completed the first reading of the law the same day, but the second reading of the bill was postponed after the escalation of human rights protests against it, which called on the parliament to entrust the relevant committees in the Council with reviewing the law and making the necessary modifications to its wording. On March 14, 2019, Parliament Speaker Mohammed al-Hilbosi had already included the discussion of the bill on the agenda of the session, but the Human Rights Committee of the Council had requested that the paragraph on the draft law be removed from the agenda of the session, as had already been done.

The draft Code of crimes of Information contains four chapters, the first chapter contains definitions and objectives, the second chapter contains penal provisions, while the third chapter contains procedures for gathering evidence, investigation, and trial, while the fourth chapter contains general and final provisions. The law is a tool for silencing opponents and a threat to Internet activists. The law contains many harsh expressions of imprisonment, life and fine against Internet activists for vague crimes such as “harming the country’s independence, unity, and safety or its economic, political, military or security interests”, and “undermining public security or damaging the country’s reputation”, and “to damage the national economy and the financial confidence of the state.”

Iraqis rely on social networks to circulate news, shape public opinion, and organize mass protests, in the absence of effective social organizations. Social media have played an active role in exposing administrative corruption and the flaws in the country’s political system. The Arabic Network for Human Rights Information estimates the number of Internet users in Iraq at 11 million, 27.5% of a population estimated at 40 million, out of which 9 million are Facebook users, and 600 thousand Twitter users.

The Internet in general, and social media websites in particular, are under the control of executive authorities, which incite security and intelligence services to arrest and torture Internet and social media activists. Several government officials and civil society activists have already been detained by the security services, according to reports from officials of the executive branch, on the background of criticism by activists of the level of public services, or widespread administrative corruption in service districts or ministries. As for blocking the Internet or social media websites, it has become commonplace in Iraq; the government often cuts off the Internet, blocks social networks, with school examinations, or peaceful protests. The government blames those it describes as “rioters”. The Ministry of Telecommunications of Iraq, for example, announced on June 21, 2018, its intention to cut the Internet from Iraqi governorates, in conjunction with the holding of preparatory certificate examinations. The ministry explained its decision to cut the Internet by confronting the use of social media, notably “Facebook”, in electronic cheating. In the early hours of July 13, 2018, Iraqi authorities partially cut the Internet, following protests in the south of the country, erupted on Sunday 8th July, owing to high levels of unemployment and inadequate government services. NetBlocks then registered a complete Internet service shutdown, on July 14, 2018, in most Iraqi provinces, including in the capital Baghdad.

Writer Samir Ubaid Hassan arrested for an article on Facebook

Security forces raided the home of journalist Samir ‘Ubaid Hassan, who holds both Iraqi and Norwegian citizenship, in the Qadisiya district of the capital Baghdad, on the evening of October 22, 2017. Security forces searched the house, confiscated numerous personal documents, his personal computers, and mobile phones. Then he was taken in a four-wheel-drive vehicle to an unknown location. After a four-day enforced disappearance, his family learned that he was being held by the “intelligence service,” because of an article he published on his Facebook account, on October 21, 2017, criticizing the prime minister.

Samir Ubaid Hassan was brought before an investigative judge in Baghdad several days after his arrest. He was charged with “spreading false rumors and news, and misleading public opinion” under article 210 of the amended Penal Code. Samir Ubeid’s arrest, came on a complaint from the intelligence service, charging him of espionage until the Baghdad Central Criminal Court, on December 11, 2018, issued his release for lack of evidence.

On February 6, 2018, the Muthanna Criminal Court sentenced the activist, Bassem Khazal Khashan, to six years in prison for insulting state institutions in two cases filed by the City Council and the integrity Bureau, after posting a comment on his Facebook personal account, criticizing the integrity Board and the City Council for failing to take the documents he had submitted against officials. After extensive public claims and protests, the Federal Court of Cassation decided, on February 27 of the same year; Bassem Khashan, in one of the two counts, was released for lack of evidence, while in the other decision was overturned and revoked, in order to complete the investigations. It is worth mentioning that in the case of Khashan, he holds the American citizenship, and runs the “eyes on the law” organization. He worked through the law to expose the corruption of employees and officials in public jobs, winning some lawsuits, and bring billions back to the state treasury. Among the cases he won was the sentence against the former Director-General of the Department of Health in the governorate.

On June 26, 2018, the Karkh Investigation Court issued an arrest warrant for media figure, intellectual and leading political activist Dr. Hashem al-Aqabi, under article 226 of Iraq’s Penal Code, alleging “the abuse of justice and the dissemination of lies through social media”. Many journalists and organizations concerned with the defense of freedom of opinion and expression denounced the issuance of this memorandum and considered it an act of confiscation of freedom of expression.

The arrest of journalist Saif Al-Azzawi, owner of the page of “Al-Azamiya News”

A special military force arrested journalist Saif Hilal Haqti al-Azzawi, the owner of the Al-Azamiya News page on “Facebook”, from Al-Aazamiya, north of the capital Baghdad, on October 1, 2018, and took him to an unknown location. Al-Azzawi was released two days after his detention, on bail, after he was accused of blackmailing citizens and politicians through his news page, which is followed by more than one million and 200 thousand users on Facebook.

The National Security Directorate in Najaf province, on the evening of March 8, 2019, arrested the NRT Arab correspondent in Najaf, Hussam al-Kaabi, before being released, on March 9, after he wrote a post on his Facebook profile, criticizing a misspelling of an “SMS” message from the National Security Service for citizens.

The local security services in Al Anbar governorate, arrested a civilian activist, Mohammed Jassim, from his home on 2 April 2019 after writing a “Facebook” post, criticizing the performance of the head of Habanyia city, a district in Khaldiya, west of Baghdad, after his city’s streets were drowned in mud, due to a wave of rain, without the intervention of service devices in the city. Immediately after Jasim was arrested and held in custody, and before being questioned, the security forces, in violation of the laws, shaved his hair as an act of reprisal, insulting and humiliating. One day after his arrest, the investigating judge ordered Jasim’s release on financial bail, after he was charged with “defamation”, under article 433 of the Iraqi Penal Code.

Security forces in Muthanna province arrested political activist Mohammed Kazem al-Iraqi on September 5, 2019, for criticizing the governor in a post on Facebook. The security authorities released him the following day, following demonstrations by dozens of Muthanna families to demand his release, accusing the government and the authorities of following the policy of muzzling voices, and targeting everyone who refuses corruption and administrative failure.