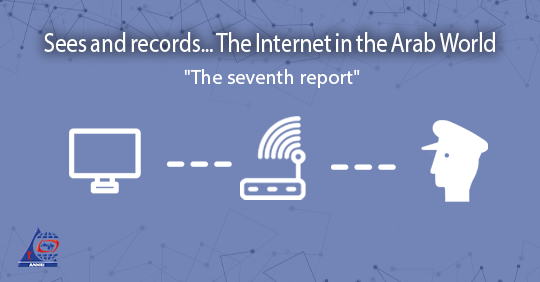 If it weren’t for the Internet, everything would settle down for the Arab governments, given their usual repression and hostility towards freedom of expression and their endemic disregard for the rule of law. But the battle is not over; there is a lot of hidden fire brewing underneath. It might blow some smoke that some may think that the fire went out, but it is still burning as people are not destined to live under tyranny.

With some minor exceptions, political parties have been absent, or forced to be absent, from the public political arena. What remains then is the opposition movement stirred by the Arab public or citizens on the Internet, bringing it to become not only the battleground of conflict between anti-democracy governments and people who are thirsty for democracy, but also a tool in the hands of those who look forward to bright future or any glimmer of hope, those people are simply the Arab public, especially the Arab youth.

This is briefly what ANHRI’s seventh Internet report talks about.

Since the release of ANHRI’s first report in 2004 tackling the Internet and Arab governments, which is published every two years, the fight is still going on. The issue has not been resolved for either of the conflict parties; whether the governments with their various institutions or the Arab peoples who are using the Internet and seek change in the world.

The internet sees, listens and records every nuance of everyday life; whether it is news reports, personal views, videos or pictures. No matter how one tries to renounce any stance or position he previously took, or any piece of news or a video he published or an opinion he previously voiced, it will remain available online and with some thorough research it will be find.  The Internet is a live archive, it never dies.

More than half of the population of the Arab world uses the Internet and nearly a third of the global population uses “Facebook”.

Among nearly 420 million Arab citizens, more than 220 million use the Internet and about 159 million are Facebook users.

There has been a relapse in the Arab uprisings but they didn’t die. Revolutions of dignity and social justice do not die; their sound may fade down but it doesn’t completely fade away. If the first wave of Arab revolutions- which involves 6 countries “Tunisia, Egypt, Yemen, Syria, Libya, Bahrain” has witnessed some inactivity, the second wave has, yet, very little to do with first one “Algeria, Sudan, Iraq, Lebanon”.

The Internet is always present. It always helps and supports the calls for change. This includes Facebook, Twitter or YouTube, in addition to dozens or hundreds of independent news websites that provide free and professional media; especially after the Arab governments imposed strict controls on all media platforms that practice professionalism, either by blocking or suspending them or by launching smear campaigns against them. What remain, hence, are the superficial media platforms that only seek for appeasing the government and glorifying the ruler regardless of who he is.

But blocking didn’t help; the public is still involved in making the news and checking its accuracy, veracity and validity. If a news report is blocked in a website or a newspaper, you will find it available in another website or any of social media platforms.

The general public who uses the Internet as a tool for change is the one who, most probably, pays the price! More than 70% of prisoners of conscience are prosecuted and sent to jail because of what they wrote on the Internet.

And as the popular Arab proverb says: “The sunlight cannot be masked by a sieve”,

The Internet, likewise, cannot be banned or blocked.

The Internet sees and records everything and is always available for whoever seeks news, information, or opinion.