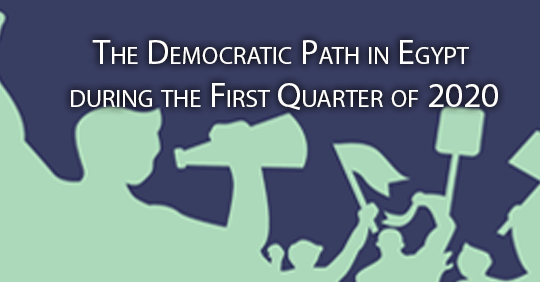 The report monitors the protests that took place in Egypt during the aforementioned period, alongside: the trials of various political forces and their affiliates, judicial decisions, military trials of civilians, death sentences in public opinion-related cases and assaults on human rights defenders and media freedoms.

According to the report, the first quarter of 2020 has witnessed: 80 protests that raised political, social and economic demands, the trial of 1332 civilians before the military court, 17 rulings of conviction, 8 rulings of acquittal and death sentences against 41 defendants. The Prison Authority sector has already carried out the death sentences that were issued against 9 citizens. The reporting period also witnessed 34 cases of violations against media freedoms.

ANHRI said, “The security forces’ arrest of citizens, in light of the COVID-19 outbreak known as the coronavirus pandemic, because of their peaceful expression of their opinion demanding the release of pretrial detainees, constitutes a further closure of the public sphere and a crackdown on the freedoms of citizens and their right to voice their views.”

ANHRI calls on the Public Prosecutor to release those held in pretrial detention especially those who have not been involved in violence incidents, or to replace their detention with one of the precautionary measures stipulated in the Criminal Procedure Code. ANHRI also calls for the conditional release of those who received an anti-freedom ruling and have already served half of their prison term as a preventive and protective measure as being Egyptian citizens.

You can check the report through the following link:

-Alexandria back and forth, inside the hell of patrol cars, journalist Shaimaa Samy’s detention renewed on paper! Is the Public Prosecutor aware of the State Security Prosecution’s violation of law?