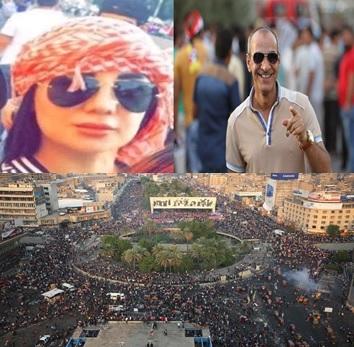 The Iraqi government has stepped up its violent crackdown on peaceful demonstrators, including human rights defenders and other activists, as the campaign of mass arrests and fatal attacks continues. Meanwhile, the Internet has been repeatedly shut down, and a number of journalists and bloggers have received direct threats ordering them to refrain from covering peaceful demonstrations, which started on 01 October 2019. The undersigned organisations call on the Iraqi authorities to immediately end violence and reprisals against protestors, and uphold the rights to peaceful assembly and freedom of expression.

In an attempt to break up peaceful sit-ins in the capital Baghdad, Basra and other central and southern Iraqi cities, security forces have used live bullets, tear gas, and sound bombs against demonstrators. In addition, unidentified armed groups have killed and abducted civil society activists.

The latest reliable reports from rights groups in Baghdad and Basra confirmed that since 07 November, the authorities have been using heavy tear gas cannisters, smoke grenades and sound bombs for crowd control, followed by live ammunition to target protesters, including high school and university students and other unarmed citizens holding only the Iraqi flag. In Basra, the authorities used shotguns to fire iron pellets against protesters. The authorities also burned protesters’ tents and targeted medical teams in various cities. These violent actions resulted in large numbers of demonstrators being killed or injured across the country.

On 06 November 2019, late at night, prominent writer and civil activist Amjad Al-Dahamat (pictured on the top right) was assassinated by an unidentified armed group driving a black car without numbers using pistols with silencers. The murder took place just 500 metres from the Headquarters of the Police Command in Al-Amarah city, after Al-Dahamat attended a meeting with the Police Commander together with several activists.

Civil society activist Bassam Mehdi, who accompanied Al-Dahamat, was reported to have been seriously injured in the armed attack.

Al-Dahamat, who is considered one of the most important leaders of the popular demonstrations in Maysan governorate, has trained thousands of young people in his area on how to volunteer for civil work and contributed effectively to all the protests that took place in the governorate. In one of his last published articles, he stated, “It is up to the youth themselves. Yes, no one will give you anything. You have to take it for yourself, beginning with your slogans: ‘We want a homeland’, and ‘I came down to take my rights.’”

Also on the night of 06 November 2019, physician Abbas Ali was killed in Baghdad when a member of the Riot Police Force, shot at him, and a bullet penetrated his chest. The murder occurred near the Martyrs‘ Bridge in Baghdad as he tried to reach wounded demonstrators in this area to give them urgent treatment. He was taken to hospital by Tuk Tuks drivers, who have been hailed as heroes for using their vehicles as ambulances, but he died on the road. A video has emerged showing his colleagues raising his stained white medical jacket and offering respect for his dedication to the work.

On the evening of 07 November 2019, a member of the security forces in civilian clothes abducted journalist and civil society activist Ali Hashim and took him to an unknown destination. Hashim participated actively in the demonstrations of Tahrir Square in Baghdad and published several photos on his Facebook account about his participation in peaceful demonstrations. He participated in previous protests and was arrested and tortured after taking part in the 2015 demonstrations.

Also, on 07 November 2019, civil society activist Hussain Al-Kaabi was arrested by security forces at a protest in the Al-Rifai district in Dhi Qar Governorate, for leading protests, and inviting citizens to participate.

On 02 November 2019, civil society activist and paramedic Saba Al-Mahdawi (pictured on the top left) was kidnapped by unidentified gunmen on her way home from Tahrir Square in Baghdad. Reliable reports confirmed that she was kidnapped before arriving home, and there was no contact with her after 11:15 pm. Al-Mahdawi, who works for a private sector company, volunteered as a paramedic in Tahrir Square to help wounded protesters.

A month before, on 07 October 2019, at 7:15 pm, civilian activist and physician Maytham Mohammed Al-Helo was kidnapped as he left his clinic in the fourth police district, west of Baghdad, by an undefined armed group in a four-wheel drive vehicle with tinted windows, who took him to an unknown destination. He was only released on 24 October 2019.

Also, on 07 October 2019, human rights lawyer Ali Jaseb Hattab was kidnapped in the city of Al-Amarah in Maysan Governorate, southern Iraq, by a group of armed men who surrounded his private car, removed him by force and took him to an unknown destination.

There have been credible reports that several other civil society activists in Baghdad and the rest of the cities where protests are happening have been kidnapped by unknown armed groups. In addition, a number of released human rights defenders and activists confirmed that they were subjected to torture and severe beatings and forced to sign pledges not to participate in peaceful demonstrations.

We the undersigned strongly protest the arbitrary measures taken by the Iraqi authorities to summon some demonstrators under the Anti-Terrorism Law, in addition to threats made to dismiss state employees from their jobs or suspend students for participating in demonstrations.

Preliminary statistics indicate that around 300 protesters have been killed and 14,000 injured since 01 October 2019, when popular protests began, up until 08 November 2019, that were caused solely due to the use of excessive force by security forces, riot police and armed groups against peaceful demonstrators.

Reliable sources reported that, on some occasions, Forensic Medical Departments in various areas, including Karbala, have refused to hand over the bodies of protesters unless their families signed a declaration that the government is not responsible for the killing. Families who did not sign have yet to receive the bodies of their loved ones.

Last week, the authorities completely shut down the Internet starting in the afternoon on 05 November 2019 and returned it on 07 November 2019 for just one hour. The Internet has been repeatedly cut off for long periods of time during recent days in an effort to prevent journalists and human rights organisations from circulating news of violations and the grave acts committed by the authorities against civilians in sit-ins in various parts of the country. The blockage also prevents protesters from communicating with each other and organising protests and peaceful movements. Social networking sites have been mostly blocked for 45 days since the beginning of the protests.

Local sources confirmed that security forces used expired tear gas and heavier teargas cannisters not normally used for crowd control against demonstrators, in addition to firing directly and deliberately at the heads of demonstrators with heavy teargas cannisters and smoke grenades, maiming or killing them immediately. Based on testimonies from the field, some of the cannisters contain unusual gases which leave protesters breathless and losing consciousness, in need of intensive medical treatment.

The undersigned organisations strongly condemn the excessive use of force by the Iraqi authorities, including live bullets, expired tear gas or smoke grenades against peaceful people, and demand that they cease all violence immediately and protect peaceful demonstrators throughout the country in a transparent and serious manner. The Iraqi authorities must uphold the country’s international obligation to protect the right to life of its citizens, among other human rights, including by addressing the recommendations of Iraq’s Universal Periodic Review (UPR), which took place at the United Nations on 11 November 2019.

The undersigned organisations call upon the Iraqi government to immediately and unconditionally:

-Prisoners of conscience in Egypt: No release, no trial, no visits ANHRI reiterates its call on the Public Prosecutor and the Interior Minister to halt victimization and harassment of prisoners and respect the rule of law