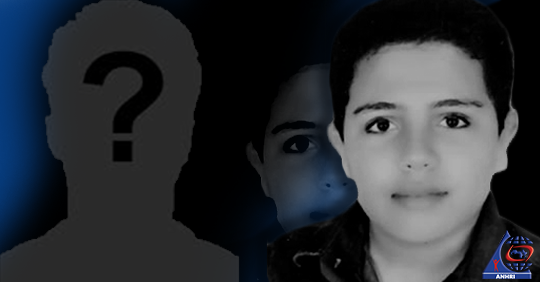 Two years ago, specifically on 5 September 2017, Abdul Rahman Samir Ibrahim Musa Nassar was 15 when he was forcibly disappeared.

His mother told ANHRI’s lawyers the story so that they could report it, perhaps one day any reasonable person will listen…

Two years have passed since the boy went missing. Despite taking all legal measures to urge the Ministry of Interior to disclose his whereabouts and respect the judiciary if he is in their custody, or to carry out their duty to look for the child and stop or prosecute the criminals who misrepresented the ministry’s official status to kidnap the child claiming that they are policemen, the ministry however took no action until this moment!

Action may only be taken by the Interior Ministry if an outcry is provoked; as it may accuse those demanding to disclose the child’s whereabouts or find him of damaging the reputation of the state.

The mother begins her story: “The journey of torment and suffering began when a number of people in plainclothes knocked on the door on 5 September 2017 claiming that they are affiliated to the security forces. They said that owing to his namesake, they would take him to Damietta Police Station to check the case and return him back. Consequently, Abdul Rahman went with them, and then his father followed him to the police station, where the officers denied that they had sent any force to his home. His father, thereafter, headed to the Security Directorate which also denied sending any force to arrest his child or having him in their custody.”

The mother continued: “We sent a telegram to the Prosecutor General, the attorney general of Damietta Prosecutions and the Interior Minister on 6 September 2017. Then we filed a communiqué reporting his disappearance at New Damietta Police Station registered under No. 2954 of 2017 Administrative Damietta on 9 September. Five months later, on 22 February 2018, when our reports met with no response, we made an official notice to the Minister of Interior to oblige him to search for our missing son and to disclose his whereabouts in case he is in the grip of the security. Meanwhile, I tried to communicate with the Public Prosecutor sending him a letter entitled “A mother’s distress call” carrying number 4063, urging him to search with me for my child and to try to find his place”.

– On March 26, 2018, lawyers of Abdul Rahman Samir’s family at ANHRI filed a lawsuit (No. 32884 of 72) before the Court of Administrative Justice against the Public Prosecutor and the Minister of Interior in their capacity to oblige them to disclose the whereabouts of Abdul Rahman!

– The case’s hearings had been held throughout the whole year until 15 December 2018, when the court decided to accept the urgent part/aspect of the lawsuit, and obliged the litigants to disclose the whereabouts of the complainant’s son, and, accordingly, they were referred to the State Commissioners Authority to prepare a report of legal opinion.

Since that day till now, silence has being dominating the scene. Two years have passed and child Abdulrahman has become a young man and has still been missing!

–  The Interior Ministry did not implement the court’s decision to search for him and disclose his whereabouts, and their stance raises questions no one has their answers but them.

–  If the child is in their custody, how can we oblige the Ministry of Interior to respect the court’s decision and disclose his whereabouts?

–  If the child is not in their custody, how can the Interior Ministry stay silent and irresponsible for those who impersonate the National Security officers and abduct young people and children from their homes?

– Why did the Ministry of Interior make no effort to search for a kidnapped Egyptian child?

Hospitals, police stations and nursing homes; the mother searched everywhere accompanied by her lawyers, a search journey that didn’t and will not stop until she gets a response to her legitimate question “Where is my son?”

Who can oblige the Ministry of Interior to fulfill its duty to look for an Egyptian child who has been kidnapped? If they arrested him, they had to declare his whereabouts. If not, then they have to look for him, and try to pursue those who impersonated them claiming they are police officers to kidnap the child.

If they continue to turn a blind eye to the case and remain silent, then why should we trust them and trust their ability and capacity to protect the security and safety of citizens?