We apologize: We won’t respect the law today “About the phenomenon of security pretexts and lawlessness in Egypt” 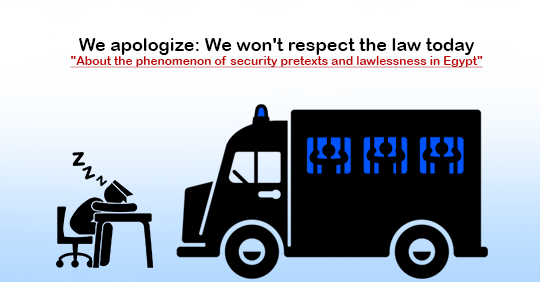 This is no longer a concern confined to lawyers of the families of defendants or prisoners, but it is rather enough to be familiar or concerned with public affairs in Egypt to be hit right between the eyes when you read a new expression that has become common and frequently used during the past period; which is “inability to transfer the defendants” or “due to security reasons“.

It means that the Ministry of Interior, represented in the various security directorates and the Prison Service Sector’s patrols departments, refrains from transferring defendants from their different places of detention to the place where their hearings are convened, whether prosecution offices or courts with their different degrees or to hospitals for treatment, under the pretext of having a security issue that would prevent it from transferring these defendants to the headquarters of the prosecution, courts or hospitals.

This applies to defendants languishing in Egyptian prisons similarly over criminal cases or cases of a political nature.

This situation occurs even though the general rule is that the Ministry of Interior is the only body entrusted with the implementation of the decisions issued by courts and prosecutions of varying degrees and designations.

It is also the only body mandated to implement final court rulings, pretrial detention renewal orders, and all other various related procedures.

Why this legal paper?

In spite of the illegality of security excuses and pretexts, which undermine the rights of both defendants and defense lawyers besides diminishing the application of the rule of law and the role of the judiciary itself, the Interior Ministry- due to lack of accountability- has started to deal with the security excuses-related decisions as if it became a matter of fact that has legal justification, which is actually not true.

During the past two years, however, the ministry had been dealing with such decisions in a timid manner, especially on various occasions such as the public and official events and celebration, under the guise of the need to intensify security enhancements and so forth.

First: The issue of security excuses and the law

“The investigating magistrate (judge) shall, prior to issuing an arrest warrant, hear the statement of the Public Prosecution and the defense lawyer of the suspect. The arrest warrant shall include a statement of the crime attributed to the suspect, the penalty prescribed thereto, and the reasons on which the detention order is based. This article shall apply to orders pertaining to the extension of pretrial detention under the provisions of this law.”

Third: Examples of cases where defendants and lawyers have been harmed by security excuses decisions

The examples mentioned in this paper were to name just a few, and they are all experienced by ANHRI lawyers on a daily basis in prosecutions and courts (with their different types) which witnesses numerous examples of security excuses for bringing and transferring defendants to have their cases considered. Some of these defendants are criminal suspects and others are accused in cases of a political nature. Lawyers, regardless of their different affiliations, are eyewitnesses to the shortcomings of Egypt’s justice system under the current political regime, a matter that ANHRI characterizes as a contravention of all laws and international conventions signed by Egypt, and accordingly, it should at least show respect for such regulations and agreements, and ensure not to breach or circumvent them using security-related measures.

the legal paper on pdf

the legal paper on word